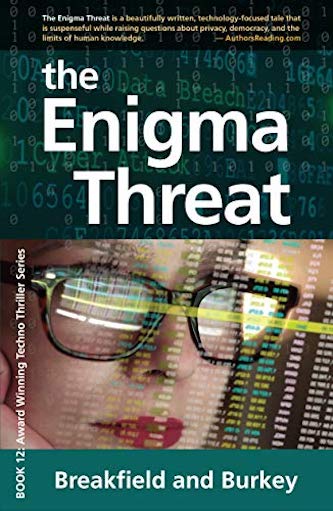 Breakfield and Burkey have done the impossible. They have added a touch of heart-wrenching humanity within the framework of a suspense-filled technothriller.

The Enigma Threat opens with a bang.

The Data Center is under a direct assault.

All circuits to the World Wide Web are saturated with data bombardment from unknown sources.

As a result, Quip’s Supercomputer can’t find his adversaries.

He can’t identify them.

And outside, armored troops are moving on R-Group’s Zurich operations center.

Charles Breakfield and Roxanne Burkey have unleashed their newest technothriller that confronts the rise of cyber terrorism.

What makes the thriller so frightening is that it reflects the world today.

Regular news networks are being washed away by social networks.

Crimes are watched in real time.

Television cameras pry on every life.

It’s an Orwellian glimpse behind the scenes of a daily struggle for survival that most of us never see, never know exists.

Breakfield and Burkey have done the impossible.

They have added a touch of heart-wrenching humanity within the framework of a suspense-filled technothriller.

It may be a war fought by computers.

But real human beings with hopes and fears, ambitions and dreams are the ones controlling the computers, conducting the fight.

Who remains to fight another day?

Open page one and buckle up. You’re off on the thrill ride of your life.