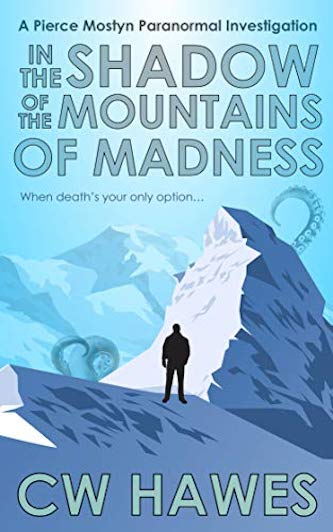 The taut writing of CW Hawes – fraught with fear, uneasiness, and dark humor – wove its way into my most dreaded nightmare and led me down into the horrors that crawl from one end of the mountains of madness to the other.

Pierce Mostyn and his team are sent to Antarctica to find out what destroyed the Vostok Research Station. What they find doesn’t bode well for humanity.

And to find out if humanity can be saved, Mostyn and his team must bore through the ice cap to reach the subglacial Gamburtsev Mountains — the infamous Mountains of Madness.

In the Shadow of the Mountains of Madness is the eighth book in CW Hawes’s Pierce Mostyn Paranormal Investigations series.

If you love weird fiction, horror, monsters, humor, action, and the Cthulhu Mythos, then this series is for you!

The wildly inventive mind of CW Hawes takes us far beneath the ice of Antarctica to track down, discover, and battle the remains of an alien civilization that created its own curious world thirty-five million years ago in caves that have been carved throughout the mountains of madness.

You may not get there.

You may get there.

Chances are you’re not coming back.

Only Pierce Mostyn and his highly secretive team from the Office of Unidentified Phenomena would dare venture into such an otherworldly place on earth.

The stage is set quickly.

A Russian base in Antarctica is empty of life.

It occupies a frozen land of the dead.

No one is alive.

There have been decapitations.

The field hospital has become a morgue.

Pierce Mostyn knows what the official government story will be: Someone went berserk, killed everyone, and tore up the place.

Whatever happened wasn’t the work of humans.

He fears that the Russians were responsible for their own demise.

Their goal was to drill down past the sixth largest lake in the world to see if they can find any traces of life.

They went too far.

They found life all right.

They unleashed The Elder Things.

They gave the Shoggoths a chance to escape to the top of the world.

Is it the end?

Or merely the beginning of the end?

Mostyn and his team drill deep into the earth and discover the caves. They stumble upon an Cyclopean City of stone towers crumbling ramparts, a demonic plateau beneath the ice, mysterious and forbidden.

But what awaits them?

The deadly march of The Elder Things with their gray uniforms, wings, and faces shaped like starfish?

A battle to the death?

Or was there only one way in and no way out?

Quite simply. In the Shadow of the Mountains of Madness, is a captivating ride that carried me to a place I never knew existed and still don’t know if it really exists. But I know the story left me feeling as cold, as hopeless, as helpless as Mostyn’s team caught in the clutches of monsters that inhabit the dark regions of a netherworld.

The taut writing of CW Hawes – fraught with fear, uneasiness, and dark humor – wove its way into my most dreaded nightmare, jerked me out of my chair, and led me down into the horrors that crawl from one end of the mountains of madness to the other.

His imagination is unchecked, unleashed, and running wild.

Take a deep breath when you begin.

It may be the last breath you take for a while.

The suspense is smothering.

And I could hear CW laughing at us all the way to the end.

Please click HERE to find In the Shadow of the Mountains of Madness on Amazon.