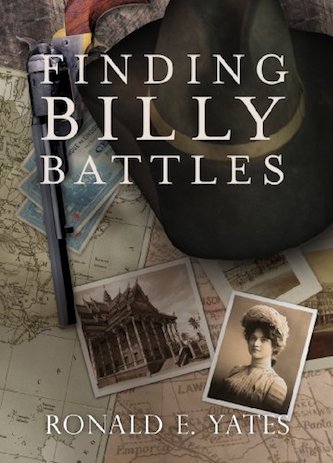 The old soldier’s adventures had carried him around the world. But he has long kept his most intimate and terrifying secrets to himself.

The great-grandfather’s name is Billy Battles–a man often trapped and overwhelmed by circumstances beyond his control.
For much of his 100-year-long life, Billy is a man missing and largely unknown to his descendants.

His great-grandson is about to change that. As he works his way through the aging journals and the other possessions he finds in the battered trunks he uncovers the truth about his mysterious great-grandfather–a man whose deeds and misdeeds propelled him on an extraordinary and perilous journey from the untamed American West to the inscrutable Far East, Latin America, and Europe.

As he flips through the pages of the handwritten journals he learns of Billy’s surprising connections to the Spanish-American War, French Indochina, and revolutions in Mexico and other Latin American countries.

But most of all he learns that in finding Billy Battles he has also found a long-lost and astonishing link to the past.

I wish I had known William Fitzroy Raglan Battles.

Were his journeys based on the exploits of someone else?

But the deft handling of his life and times, as written by Ronald Yates, has tantalized me with the possibility that there just might be more to William Fitzroy Raglan Battles than meets the eye.

Yates himself calls the novel faction – facts intermingled with narrative fiction. But all I know is that Finding Billy Battles reads like the memoir of one of the most tormented, eccentric, and fascinating characters I’ve ever read about.

It is historical, set in the 19thcentury, in Kansas, a state known for violence and lawlessness.

But as Yates says, “It’s not a Western, not in the classical sense.” Yet William Fitzroy Raglan Battles, best known as Billy Battles, wanders the great prairies, cattle towns, and mining camps of the Old West, running into the likes of Bat Masterson, Wyatt Earp, and Doc Holliday.

Ron Yates makes it easy for us to believe Billy Battles was, too.

The premise of the novel is exceptional.

A boy meets a long-lost great grandfather in a home for old soldiers. William Fitzroy Ragland Battles is a man he has never before met. The venerable old warrior has been around for 98 years.  His eyes, the boy remembers, were the color of pale slate and almost as hard. His adventures had carried him around the world. But he has long kept his most intimate, his most terrifying secrets to himself.

However, the old man takes a liking to the boy, his only remaining male relative.

And when he dies, he bequeaths the boy his two trunks filled with journals of a life that has carried him from the prairies of Kansas to China and on to French Indochina, Singapore, Tokyo, Germany, Mexico, and Central America. Among his possessions is a 750-word manuscript, his life, his travels, his experiences, his times as described in his own handwriting.

He had been a journalist.

He had been a soldier.

In a single afternoon, he had found himself turning from a newspaperman to a murderer and then a long rider, a fugitive, an outlaw.

And the first person he ever killed had been a woman.

She happened to be in the wrong place.

In the middle of a gunfight.

He would regret that violent afternoon for the rest of his life.

Before his ship sails from California to China, Wyatt Earp tells him, “That’s a long way to go to find peace.”

For him, however, it’s not the end.

The adventure has only begun. And what an amazing and unforgettable adventure it is, so remarkable that it will not fit in a single book. Finding Billy Battles is only the first episode of the trilogy.