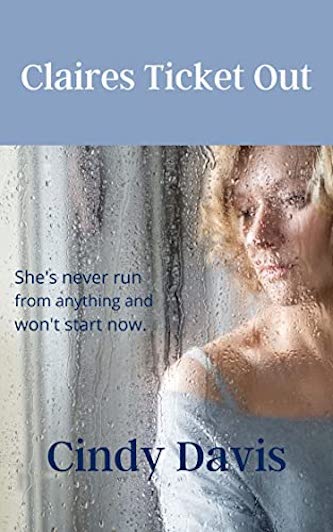 The thriller is told by three primary voices, and nothing is ever as you think it should be. Author Cindy Davis plays tricks with your mind and your imagination.

One woman bent on revenge. One unsuspecting woman. Is one man enough to keep them apart?

Claire blames Payton for the fact that she’s been locked in an asylum for nine months. When a fellow inmate jokes that she and the bailiff look alike, she devises a plan to escape using the woman’s identity.

Though it’s been almost a year, Aden still loves Payton. He decides to find her and propose. He arrives at her parents’ home hours after she leaves for Rome, and just hours after Claire wreaks havoc on her family.

Payton’s plane goes down, and she is rescued by a fishing captain who urges her to stay with him until she’s well. While she recovers, he does everything to thwart anyone’s attempts to find her.

Claire and Aden are both focused on finding Payton. Where will their paths cross? Who will live to see the future?

Claire’s Ticket Out is a spellbinder. It is a pure, unadulterated suspense thriller, as good as any I have read in a long time, and I read a lot of suspense thrillers. The story is breathless. It moves along at a frantic and reckless pace from beginning to end. It’s like a magnet. It grabs you, holds on, and won’t let go until the final paragraph has been written. By then, you’re weak in the knees and out of breath.

The thriller is told by three primary voices, and nothing is ever as you think it should be. Author Cindy Davis plays tricks with your mind and your imagination.

First, there is Claire Baines. She is in an asylum.

Her son is dead.

And she murdered the murderer.

One more must die.

Revenge has corrupted her heart and sanity.

She’s running away to Italy.

She’s leaving memories she would rather forget.

But still, they haunt her.

She doesn’t hear the footsteps.

She doesn’t see the shadows.

But someone is right behind her.

Someone wants her for a wife.

Someone wants her dead.

And third, there is Aden Green. He’s handsome. He’s rich. A former ambassador, he runs in powerful political circles.

But he is grieving.

He’s still in love with the girl he lost.

He doesn’t know, but he wants her back.

He wants to marry Payton.

Claire wants to kill her.

And Payton has no idea she’s one step away from love or from death.

In a myriad of wild circumstances, all three wind up on the streets of Rome. What have they faced? A plane crash. What do they face?  Amnesia. And a kidnapping. Payton becomes a lost and wayward soul.

Who will find her first?

The gentleman with the wedding ring?

Or the lady with a knife?

Claire’s Ticket Out is guaranteed to keep you guessing and your spine tingling.

Please click HERE to find Claire’s Ticket Out on Amazon.