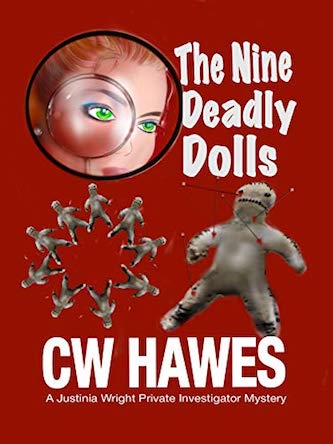 CW Hawes has created a puzzle in the form of a book, scattering and then rearranging the pieces on the pages as he wrote.

Bobby Joseph Frieden believes his uncle was murdered and that nine little voodoo dolls have something to do with it.

But how are the dolls connected? And what’s with the box a mysterious and dangerous voodoo cult wants to get back?

When a second and third murder occur, Tina decides it’s time to fight fire with fire.

The Nine Deadly Dolls is a novelette set in the same world as the novel-length Justinia Wright Private Investigator Mystery series.

If you like the traditional puzzle mystery, with enough wise-cracking humor, thrills, and spills to keep things interesting, then you’ll love this latest addition to the world of Justinia Wright.

CW Hawes has created a puzzle in the form of a book, scattering and then rearranging the pieces on the pages as he wrote.

There are, of course, the nine dolls.

But what do they represent?

Or something more sinister.

A man is dead.

But was it suicide?

Do the spirits exist?

Or do they live only in a demented mind?

What mystery enshrouds the Haitian community?

Or an international terrorist organization?

Which cult is called the Black Hand of Death?

And who leaves behind a message that says: “Put the casket on your front doorstep at sunset, and leave it there, three days hence, or you will die.”

The message is conveniently left beside an old man hanging from the beams in his home.

Lives may be secret.

But fear is everywhere.

How can a private investigator put all the missing pieces together?

She was once a spy.

Perhaps she still is.

And she’s not quite like any detective you’ve met before.

She simply explains them by saying, “Sometimes it rains, and you’d rather it didn’t.”

The mystery of the nine dolls has a lot of questions.

What are the answers?

It all depends on how CW Hawes writes it and private investigator Justinia Wright solves it.

You won’t dare quit reading the novelette until she does