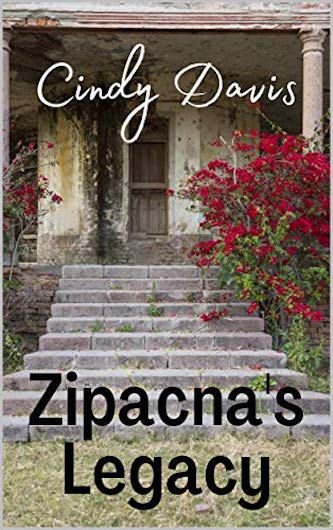 There is an energy vortex in Chi’país, Mexico. Rumor has it the elderly Zipacna created the vortex to lure unsuspecting outsiders (and their tuition) to his school of shamanism. Within the spiritual world, it was a celebrated center for spiritual training, teaching at levels beyond the ‘back to Mother Earth’ that centuries of shamans learned.

Granddaughter Jade inherits the property thinking it’s a hotel. When the townspeople shun her, and someone tries to frighten her away, she is baffled but believes they will come around in time. She discovers the energy vortex but all she knows is it makes her feel invigorated. Until the arrival of 8-year-old Miguel, who, through his spiritual connection to Zipacna, helps awaken a shocking asset: her seer and healer’s ability, which she comes to realize she had all along.

A secret room imparts the knowledge she needs to embrace her spirituality and find a way to bring it to the world. She comes to terms with her legacy, repairs relationships thought long lost and reopens the school.

Something is not quite right.

And Jade French has no idea what is happening to her.

Her boyfriend is devoted to her.

She has been chosen for a promotion in her company.

And she is throwing it all away.

Jade French is on the road to Mexico.

And she’s not sure why.

She has inherited her grandfather’s home near the village of Chi’pais.

Or was it a hotel?

Or is something far more mysterious?

Why would he leave the grand structure to her?

Jade had not seen him since she was five years old.

Now she is a stranger in a strange land.

She sees birds that aren’t there.

She sees an elderly man who isn’t there.

She hears a voice.

And no one’s there.

Even the people of Chi’pais treat her as an outcast.

Do they know something about her grandfather?

Do they know something she doesn’t know?

Is the old hotel haunted?

Why are they bent on driving her away?

In the midst of turmoil and trouble, Jade experiences an awakening deep inside her heart and her soul.

It becomes a journey of discovery.

It becomes a spiritual quest.

She has inherited more than her father’s grand manor.

She has inherited his legacy, his ability to heal those around him, their sickness as well as their relationships.

Jade French will never be quite the same again, and neither will the readers of Zipacna’s Legacy.

It’s a sometimes surprising and sometimes stunning novel – beautifully written with a tale beautifully told – a novel that re-awakens and re-energizes the spirituality found within us all.