The Musical Inspirations Behind Scathed by Sue Coletta 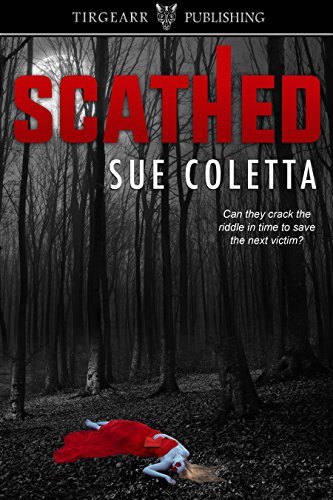 My fans expect psychological intrigue, serial killer suspense, and a riveting thrill ride when they buy my books.

Writers never know when the seed of a story idea will take root. In this post I’ll share a behind-the-scenes look at my new psychological thriller, SCATHED, and what lead to the premise. You may be surprised at how the story came together.

Early one evening as I waited for my husband to get out of the shower, I was sitting in my chair in the sunroom, gazing out the window at my crows, chipmunks, and squirrels, munching on peanuts, sunflower seeds, and suet that I’d cubed into bite-sized pieces. Country music played in the background. Specifically, Tim McGraw’s “Live Like You Were Dying.”

And I wondered how someone would react if they knew they were dying. What if they didn’t know? What if the act of dying happened without warning? What would the moments that led up to death look like? How would one’s family cope with this type of blow? What if, at the same time, a serial killer stalked the streets? Could he be responsible for the impending death? Or could that person on the brink of death defy the odds and pull through? Would they live life differently because of the experience? If so, how? Would their values change? Would their views change? What would that look like? As you can imagine, more and more questions flooded my brain — all due to this one song.

Once that seed embedded itself in my brain, it haunted me for weeks. I wrote half the novel, trashed it, and started over. Why? Because something was missing, and I couldn’t figure out what it was. There wasn’t anything wrong with the storyline. It just felt … off. I’m a big believer in listening to our story sensibilities, so starting over seemed like the right thing to do. My fans expect psychological intrigue, serial killer suspense, and a riveting thrill ride when they buy my books. And that’s what I strive to deliver each and every time.

Still, those questions haunted me. Whenever I turned on the radio I heard that song. Which, by the way, is over five years old. It had to be a sign, right? Days after I trashed all that work, I had my headphones on while thinking about how I might salvage parts of the initial story idea, enough to satisfy the voices (Ha!), when this next song biffed me upside the head. I was listening to Ozzy Osbourne’s “No More Tears.”

Ahhhhh … that’s more like it. I watched the video about ninety-five times, and Paradox — the villain in SCATHED — whispered in my ear, “It’s me you’re looking for.”

Chuckling as my fingers raced over the keyboard, the more I listened to “No More Tears” the more evil poured into Paradox. But I also needed to humanize him. Even killers have some redeeming qualities. Or, at least in fiction, they need a clear reason for why they kill. Most serial murderers create fantasies and try to recreate said fantasies in the real world. Thus, a pattern emerges. Either the modus operandi remains consistent or they tweak it to better fit the image in their head.

That line of thinking led to more questions. What do the crime scenes and MO say to a seasoned investigator? How might a crime writer interpret the scene? Would the two opinions clash? Or would they compliment each other? The biggest hurdle was, why would a seasoned detective ask his wife for help?

Which lead to more questions. What if each crime scene photo was so morbidly beautiful it could double as a painting or a book cover? What if the lack of blood threw investigators off their game?

Then it came time to plan SCATHED in detail. For the planning stage, I broke out my headphones again. And once again, Ozzy helped me out. This time, with the subplot. I heard his song, “Life Won’t Wait.”

Words to live by, right? Whether you like Ozzy’s music or not, you gotta admit the man can write.

The next set of ideas came when Siri turned herself on and said, “Will I live to see the morning sunrise?” Mind you, my iPhone was nowhere near me at the time. My Facebook friends may remember the story. Anyway, that one utterance from Siri’s mechanical voice sent my creativity sailing. What a perfect way to freak out Deputy Frankie Campanelli! It also aligned perfectly with the new storyline. Could her past be rearing its ugly head? Oh, yeah!
Sorry, Frankie fans. She doesn’t have an easy time in SCATHED.

Now, I don’t want to give you the impression SCATHED is all hard-core. As with all my books, there are tender moments as well. For those times I listened to a few different songs, but this is one of my favorites. For instance, I listened to Jason Aldean’s “You Make It Easy.”

Lastly, when I write suspenseful scenes, I like to listen to creepy background noises to set the mood. The next video sounded exactly like northern New Hampshire at night, so it became my go-to video for this series (the video lasts 8 hours, but you’ll see what I mean after only a few seconds). If you really want to freak yourself out, listen to this while you read the book: “Creepy Forest Night Sounds.”

Once I elicited the correct emotion in me, I narrowed in on the minute details. Every detail counts in a big-big way, especially with psychological thrillers and mysteries.

In the Grafton County Series, Sheriff Niko Quintano teaches his deputy about various forensics. In MARRED, Niko concentrated on blood spatter analysis. In CLEAVED, Niko taught Deputy Ben Mathews about entomology, how corpses react in water, and Frankie showed off her investigative skills by identifying the differences between medium-velocity and high-velocity spatter.

Scenes that deal with forensics are some of my favorite to write, but the research takes time to ensure the science matches real life. For example, in SCATHED, Deputy Frankie Campanelli teaches an underling how to cast a footwear impression in beach sand. I lost track of how many training videos I watched in order to write that scene because not every branch of law enforcement does it the exact same way. Sure, the basics remain consistent, but individual investigators have their own preferences and style. As such, I wanted Frankie to have a few tricks of her own.

I’d like to think it’s my attention to detail that adds to the series as a whole, but only you can decide that.
With riddles left at each crime scene in SCATHED, it only made sense to dig into handwriting analysis. What does our handwriting reveal about us? A lot! Use the techniques in SCATHED to test your handwriting. Or, a love note from your spouse. Or even, one of your children’s homework assignments. Incidentally, you’ll also be able to tell if someone is trying to be deceptive.

How did I connect ideas that stemmed from Tim McGraw’s and Jason Aldean’s sweet songs to Ozzy Osbourne’s madness and creepy background noises? I guess you’ll have to read the book to find out. Grin

Moments after my publisher told me SCATHED went live, the song“Live Like You Were Dying” came on the radio. Coincidence? I doubt it.