Monday Sampler: Innocent as Sin by C. A. Asbrey 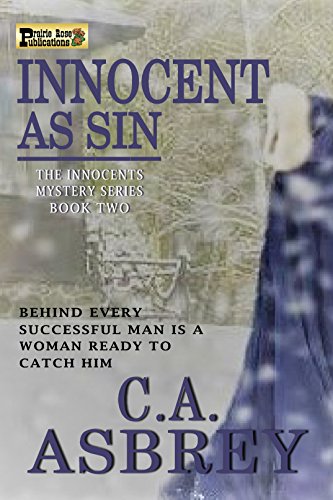 They must work together to solve the murder case, but they’re still best enemies.

“I take it this is him?” The doctor frowned at the sight of a ‘boy’ undressing an obvious corpse. “Is this the medical student? He’s far too young. Stop that immediately.”

Abigail stood, bowing her head to hide her face beneath the brim of her hat. “Sorry. I was trying to help.”

The doctor was a handsome young man in his thirties, with wavy brown hair and expressive gray eyes. “So? What have we here? Yes, livor mortis does definitely indicate the body has been moved.” He applied pressure to the dark red area in the same way as Abigail had. “He’s been dead for over twelve hours.” He tested the arm and fingers for mobility. “Probably nearer to forty-eight. Rigor has worn off. He’s stone cold. Really cold.”

“He’s been stabbed, doctor. Once in the heart. It looks like a long, thin weapon like a stiletto. There’s no blood on the clothes, and little on the body.”

“You shouldn’t have been meddling with evidence, young man.” The doctor’s voice dropped to a growl. “I admire keenness, but this is too much.”

“I’m sorry, but I’ve made other observations, if you’re interested?”

“Where’s the sheriff, Sam?” The doctor barked at the caretaker. “Get this boy outta here before he does any more damage.”

“Hey!” Nat pushed the man’s shoulder. “Get your hands off him.”

The caretaker kicked out at Nat. “Don’t push me.” Sam grabbed Abigail by the arm and dragged her out of the hall. “You’d better git, boy, or we won’t let ya sleep here tonight. It’s too cold to be out on the street.”

Jake seized her other arm and pulled her back. “We’ll go, but there’s no need to get rough with him. He was only tryin’ to help.”

“Ow! Will you all let me go?” Abigail bellowed, tugged between the pair.

“What’s goin’ on in here?” A burly man with extravagant gray muttonchops and a silver star on his jacket filled the door.

The doctor paused in his examination. “Sam’s getting rid of the boy, Ben. He fancies himself as a bit of medical genius and was meddling with the evidence.”

The lawman raised a thick brow. “You want to end up in my cells, boy?”

“No, sir.” Abigail dropped her head and pouted in an adolescent manner as everyone released her. “I’m sorry.”

She stepped away from the caretaker and walked over to the door, followed by Nat and Jake. The men shared a glance; they could see she was ready to burst the way her shoulders heaved and tightened. She reached the door and swirled around, yelling at the top of her voice.  “There’s something else. He’s been redressed after his death and they’re not his clothes. They’re trying to hide his real identity by leaving him here looking like a tramp.” She jumped aside to escape Sam’s booted kick before Jake stepped in front of the caretaker, staring him down with an arctic glower.

“A few things. There’s no puncture wound in any of those clothes, or blood. He was dressed after he stopped bleeding. The clothes almost fit him, but not quite. That’s not so surprising in a tramp as they often wear second-hand, but those clothes are covered in brick dust. He has soft hands and neatly-cut nails. He’s never done manual work in his life. His callous on the left hand shows he writes a lot and he’s left-handed. The wear on those clothes shows a right-handed pattern of use in the cuffs, and on the fabric, in general.” She paused, glancing nervously at the doctor and the sheriff. “And the trousers are far too short, but the ends are worn. How can you wear out the fabric if it’s flapping around your ankles and not rubbing on anything?”

The doctor stared at the slip of a boy in disbelief. “What age are you boy?”

“He told the caretaker the body had been dead for over twelve hours and had been moved before he told him to get you and the sheriff,” Nat said. “He’s a real smart kid. He knew about that red mark. He doesn’t deserve to be pushed about for trying to help.”

“You look younger than fifteen.” The doctor frowned. “What’s your name?”

“Albert,” Abigail said, staring at her booted feet. “I’ve never been big for my age.”

“Yeah,” the sheriff said. “Real girly, but It’s a man’s brain you got there.”

Please click HERE to find Innocent as Sin on Amazon.