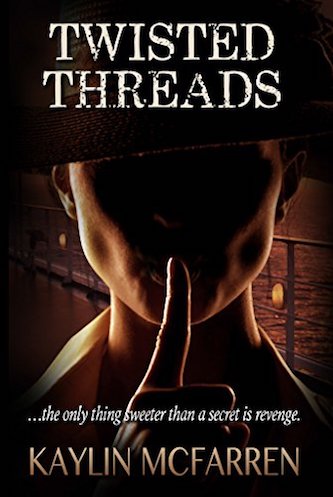 Catch Kaylin McFarren and Birdy Rivers on an archived presentation of Meet the Authors Podcast, hosted by Rob and Joan Carter at Indie Book Source.

Kaylin McFarren says: “For many years, I’ve had the privilege to experience remarkable things and rare opportunities while traveling the globe. This includes many forms of transportation, ranging from private planes, helicopters, and hot air balloons to kayaks, submarines, and elegant cruise ships.

“My journeys have allowed me to meet interesting people, discover fascinating cultures, forge lifelong friendships, and introduce dear friends to all parts of the world.

“Personal experiences, extensive research, and interesting tales shared by business associates have contributed to making this fun character-driven story possible and it’s my hope that readers are thoroughly entertained.”

Akira Hamada is driven by past failure. Two years earlier, she had a chance to kill her greatest enemy–Kaito Mitsui. Instead, the Yakuza boss forced her to become an assassin in his employ. Now Akira carries out the bloody business of the notorious crime syndicate and hates herself more each day.

When Mitsui hears that his sister’s murderer will be on the cruise ship Starfish, he immediately tasks Akira with eliminating the man once and for all. This is what Akira has trained for, but a series of strange events on the ship tests her resolve and shows her a way to redemption.

Devon Lyons, on the other hand, has nothing to do with assassins. He’s merely accompanying his aunt and uncle, Sara and Paul Lyons, on a free cruise. Little does he know that the two are the true targets of the charming Japanese tourist he has just met!

Akira knows that either Sara or Paul is the killer but doesn’t know which one. She hopes seducing the handsome Devon will lead to better intel, but she is surprised to find herself trusting him. And soon, the pair finds themselves fighting for their lives on the high seas.

When she isn’t writing she is raising her twin girls and spending time with family and friends. Before Birdy became a full-time author and an Editor she worked as a Medical Assistant.

She enjoys reading, the outdoors, gaming, and music. Music and writing have served as therapeutic measures for her depression and anxiety.

Children of the Empire

With the Evil Queen hiding in the shadows, war threatens the newly established Empire. Olivia has embraced her role and title as Snow White and the queen of the Wraith Kingdom.

The Evil Queen recruits fellow enemies of the Children of the Empire and gains the following of nasty creatures who will do anything to destroy Snow White, her friends, and the Empire.

The Children of the Empire find themselves reflecting on the past as they embrace a new future. Dark times loom overhead, but the future is bright and filled with hope providing they can make it out of the war unscathed.

Can the Children of the Empire stay united among each other, or will their differences divide them and make way for the Evil Queen to strike?