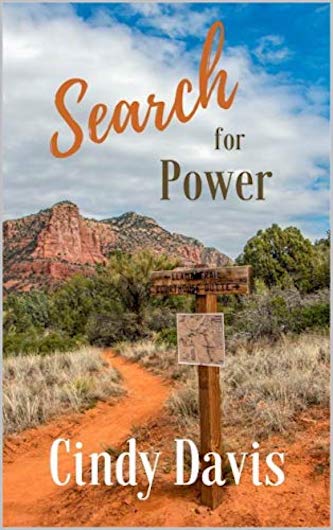 Divine timing – we are where we are supposed to be at this moment in time –  is an important concept in Search for Power.

Chaahk has a plethora of deep-dark secrets. So deep and dark that he escapes his hometown of Chi’país, Mexico to hide amongst Native Americans in Sedona, Arizona. For twelve years, he avoids his past, memories of his half-brother Zipacna, and the shamanic abilities that made him feel like a freak.

An energy vortex at Jade Martinez’s school in Chi’país draws students from all over the world, so many that she seeks to open a second school for advanced spiritual education. What better location than Sedona with its famed vortexes?

The Ocotillo Hotel is for sale. It has a vortex and would make a perfect school, but it is haunted by a pair of spirits who cannot cross into the next world. Though they beg Jade and ten-year-old protégé Miguel to help, teacher and student have no idea how to accomplish this.

Miguel is well into his shamanic training. Mature for his age, he is frustrated his healing ability is slow in developing. He knows without a doubt this trip will be the cure.

Chaahk has the answers Jade and Miguel seek but he refuses to relive anything from the past. Will Universe conspire to bring them together? Or will the alarm clock of Divine Timing fail to chime?

Divine timing – we are where we are supposed to be at this moment in time –  is an important concept in Search for Power by Cindy Davis. When Jade’s paternal grandfather names her as sole beneficiary in his Last Will and Testament, Jade wonders why he skipped over Menye, his only son and her father.

She also sadly suspects that something happened during that visit that changed her life forever. Her parents divorced. Only when her grandfather appears spiritually to her and she discovers his journals does she begin to understand he and her father have shamanic powers. Does Jade possess those same abilities?

The building never becomes a hotel. Jade follows in her grandfather‘s footsteps and opens a school for those who seek inner spiritual growth. The school becomes a success.

Jade takes Miguel, one of her students with her, to Arizona where she begins a search for Grandfather Zipacna’s brother Chaahk who fled not only from his family but also from his own spiritual powers. She locates her uncle on a trip to Sedona, Arizona to purchase a run-down hotel where she plans to open another school.

Jade finds her uncle, and despite his repeated refusal to befriend her, she doesn’t let him deter her goals. Jade startles her Uncle Chaahk when she asks, “What are you going to do with your life now?”

His response: “What kind of question is that?”

I thoroughly enjoyed reading Search for Power and highly recommend it.