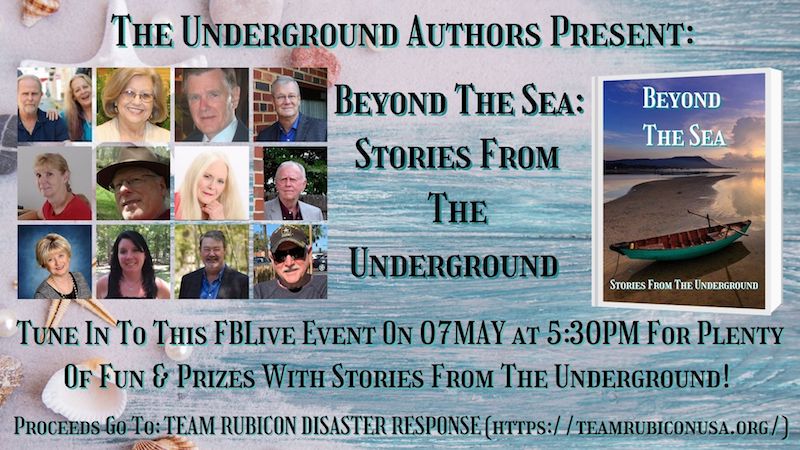 You are invited to a special Facebook Live Event

To meet 12 Award-Winning authors whose stories

Appear in a new anthology.

Lots of Fun. Lots of prizes. Lots of Stories.

Mark the date and check it daily.

Here is the event page link:

This unique group of short stories are as diverse as the authors in this group. They were instructed to write a short story using only the picture on the cover of this book. Brilliant group that they are, they came up with stories that cover murder, mystery, intrigue, romance, spiritual, and even apocalyptic genres. So, sit back, relax, and discover a little about The Underground Authors. 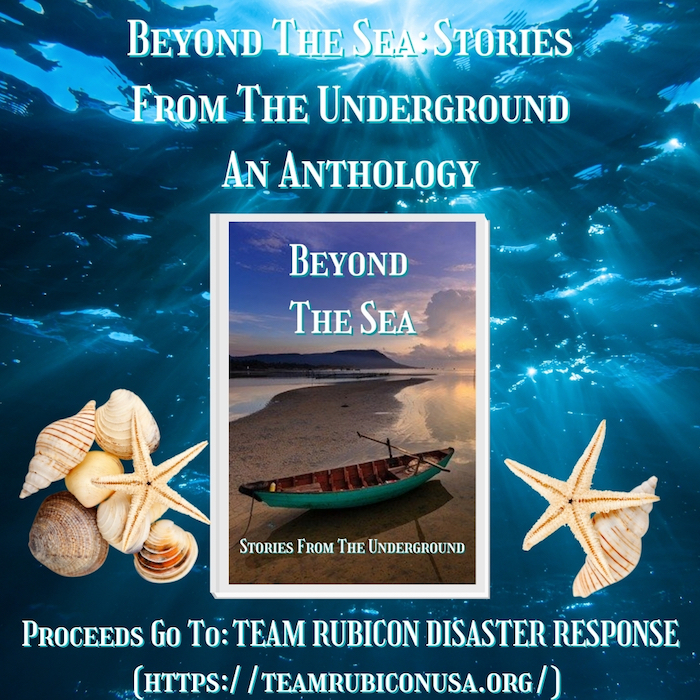 The Diving Bits by Breakfield & Burkey

Xiamara and Judith are roommates working two jobs. They’re saving tuition for entry into the high-tech world in San Juan, Puerto Rico. Fall semester isn’t far away. The girls are struggling. Xiamara wants a shortcut. She takes their savings and buys a boat. She’s convinced it’s a sailboat in the rough. Judith wants to know the whereabouts of Jack and the Beanstalk to get their money back.  Can they remain friends and overcome the challenges?

Feeling rejected after breaking up with her boyfriend, twenty-two-year-old Robin Harris flees Houston for a quiet weekend alone. The Airbnb boosted quiet, seclusion, and privacy. Nothing prepares her for the disappointing run-down, beachfront cottage or the stranger who greets her. To make matters worse, a torrential rainstorm and threats of a tornado make it impossible for her to flee. Who is this man, and will she live to see another day?

A drink, meet two of the handsome man’s friends, agree to play tennis tomorrow. All seemed innocent enough. How could she know she would become a virtual prisoner? Her plan to escape may be the death of her. But she’s willing to take that chance for freedom.

Retired baseball scout, Frankie Sicotto, leads a gray, joyless life marked by ill-health. Then his colorless world is altered overnight when he meets Devin Ramos, a fatherless ten-year old boy. They forge an unlikely friendship centered around the game of baseball, and their lives are changed in ways they never could have imagined.

The Perfect Future by Cindy Davis

Even though twelve years separate Zipacna and his half-brother Chaahk, they have been best of friends—mostly. They do have times with enormous clashes between the strong pair of personalities. Here, Chaahk’s free-as-a-bird lifestyle gets between them as they seek to forge a future together.

The Boat – A Tale of The Rocheport Saga by CW Hawes

When the world as we know it came to an end, Bill Arthur still held out hope for a new world, a better world. But what happens when that hope dies?

After scouring several Washington getaway guides, I happened on the perfect choice for a romantic retreat with my love. Lake Crescent—pristine, deep, and as cold as the waters beneath the Arctic Circle. The official depth of the lake is logged at 624 feet, but measurements of more than one thousand feet have been rumored by the locals for years. Six-hundred-twenty-four feet or a thousand feet—it would be deep enough.

Adam Cain is a big city police reporter during the 1920s who has seen too much death. He’s lost touch with his readers and himself. His editor sends Cain to explore small-town America and write about unusual places most have never seen. He becomes a travelist, venturing to Ormond Beach, discovering an aging beachcomber named Hemingway and a beautiful blues singer who abruptly disappears. Can Cain find her, and what secrets does the old possess?

The Girl In The Turquoise Bikini by Linda Pirtle

Jeb McPherson, an international award-winning author and prolific mystery writer, has contracted a most dreaded disease: writer’s block. Try as he might, Jeb could not conjure up another mystery for his protagonist Greg Watts to solve. Leaving his computer idle. Jeb walked out onto his deck overlooking the bay. Sipping his daily martini, Jeb saw the perfect inspiration standing on his private beach wearing a turquoise bikini.

Silver Lake is home to many people. This story isn’t about the people. This story follows the journey of the boat as it makes waves in the lives of others through its lifetime. Darren and his father completed the boat in 1939. Keeping it in shape through the years to 2020 has been a challenge, but the boat held so many memories, letting it go was not an option. See why in Making Waves.

Roses For Grant by Richard Schwindt

Pam and Craig arrive at a tropical resort for what appears to be a carefree vacation. But a strange encounter in a borrowed boat, triggers memories of love and loss.

The Encounter by Ronald E. Yates

During WW II Japanese soldiers trekking through the tropical forests of Western New Guinea stumble upon a mysterious object secreted inside of a jungle-covered peak. Without warning, the object erupts and transmits a powerful beam into the cosmos and seconds later most of the unit vanishes. Who put the device there? Why? After the war America’s Office of Strategic Services investigates the phenomenon. What did the OSS find and what does it mean?

Please click HERE to find Beyond the Sea on Amazon.