Jinx Schwartz: One of the Top 50 Indie Writers You Need To Be Reading 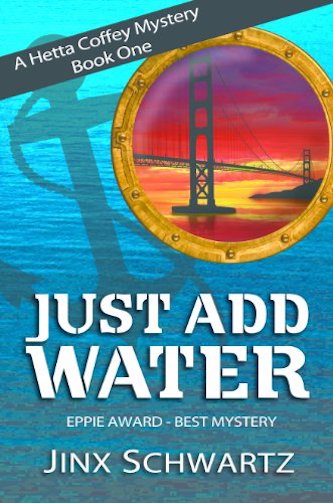 Much like the protagonist in her Hetta Coffey mystery series, Jinx is a woman with a yacht and not afraid to use it!

A ninth-generation Texan, Jinx has lived and worked all over the globe, and much like the protagonist in her Hetta Coffey mystery series, she’s a woman with a yacht and not afraid to use it!

Want to know when she has a new or free book? Go to http://jinxschwartz.com and sign up for my newsletter.

Just Add Water was the winner of the National EPPIE Award for BEST MYSTERY.

Hetta Coffey is a globe-trotting civil engineer with a swath of failed multi-national affairs in her jet stream.

Plying the San Francisco waterfront, trolling for triceps, her attention is snagged by a parade of passing yachts—especially their predominantly male skippers—and experiences a champagne-induced epiphany: If she had a boat, she could get a man.

In spite of a spectacular ignorance of all things nautical, Hetta buys her dream boat, but a shadowy stalker, an inconvenient body, and Hetta’s own self-destructive foibles imperil her goal. Hetta Coffey brings a whole new meaning to the phrase “sink or swim!” 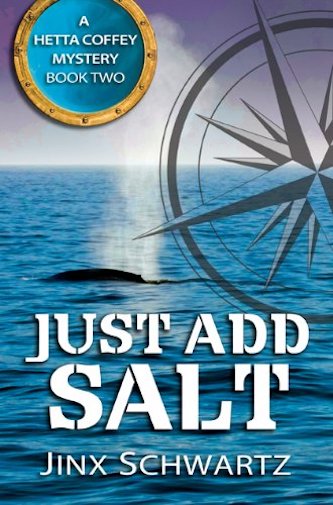 A globe-trotting engineer with attitude, a penchant for trouble, and a yacht, Hetta Coffey is back, and this time she’s steering us into hot Mexican waters.

Miffed that vacation plans with her chronically absent boyfriend, Jenks Jenkins, have gone awry, she accepts a job in Baja.

So what, if she and her friend Jan are spectacularly unqualified to take her yacht on a thousand-mile cruise in the eastern Pacific Ocean during hurricane season?

Hiring a handsome, if somewhat fishy captain for the trip might keep them off the rocks, but probably won’t do the same for her future with Jenks. Meanwhile, a little eye candy on board can’t be all bad.

Hetta’s fierce independence impels her to tackle a very profitable (if environmentally and politically incorrect) project south of the border. True to form, her irreverent nature and disregard for danger soon swamps her in a sea of mayhem, illegal aliens, a pesky whale, and a menacing Mexican machinator.

Set sail for Baja Mexico’s Magdalena Bay as Hetta Coffey leads us once more into a morass of intrigue that will keep you laughing, breathless, and wanting more. 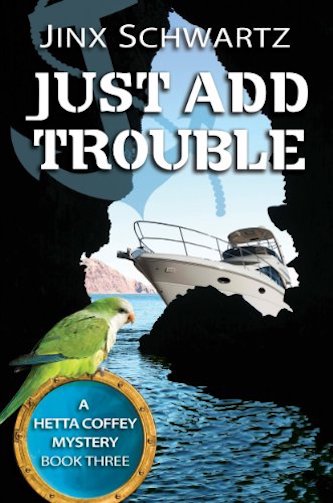 A globe-trotting engineer with adventure in her soul, Hetta Coffey is determined to solidify her relationship with her long-distance boyfriend, Jenks Jenkins. What better place for a romantic interlude than aboard her yacht in Mexico’s hauntingly beautiful and solitary Sea of Cortez?

But where Hetta goes, trouble follows, and chaos is sure to ensue. After a run-in with a couple of sea serpents that threaten to rock the boat, she nevertheless decides to take on a project in the Mexican port city of Guaymas. After all, Jenks is headed back to Kuwait, so why not cash in on the best of both worlds by picking up a few pesos while living aboard her boat in Mexico?

Once again Hetta’s indomitable spirit, stubborn independence and penchant for deceit will keep the reader in stitches as she launches herself and her best friend, Jan, into a sea of trouble. A pesky parrot, a drunken aunt, and a shadowy figure who is handsome in a “criminal sort of way” lead to murder, mayhem, kidnapping, and run-ins with several federal agencies on both sides of the border. 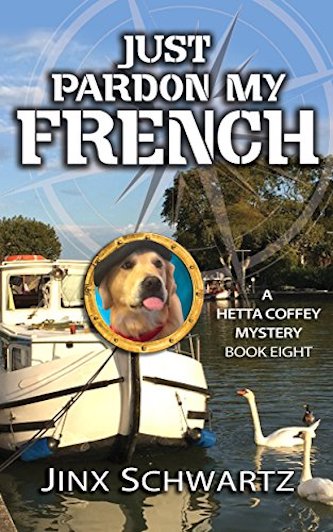 Hetta Coffey is living aboard her forty-five-foot boat in Mexico’s spectacular Sea of Cortez, taking work where she can get it and, characteristically, she isn’t all that concerned about any pesky legalities involved.

Docked at a pricey marina in La Paz, her cruising kitty is taking a hit, so when she’s offered a dream job, she jumps on it. All she has to do is act as a courier, babysitting equipment and sensitive documentation for her former employer to their new offices in France.

Not only does she get to revisit a country she once lived in and loved, she’ll meet with her significant other, Jenks Jenkins, in Paris. Oh là là! An easy job and a romantic vacation, all paid for; what could possibly go wrong?
With Hetta? Just about everything. 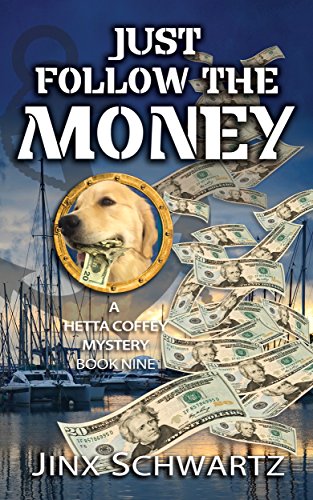 Hetta Coffey has been visiting France for a couple of months, barging on the Canal du Midi with her boyfriend, Jenks Jenkins She hit the hot spots in the South of France, ate great food, drank fine wine, and foiled a terrorist plot: all the usual stuff.

Now, she’s ready to leave for Mexico and back to her yacht in the Sea of Cortez, but not so fast! At the last minute, she’s offered a mysterious and lucrative assignment by persons unknown, and jumps at it. After all, Jenks is back at work in Dubai, so why not stay in France a little longer and make some bucks, to boot? Never mind that she doesn’t know where she’ll be working, or for whom.

Ending up aboard a mega-yacht in the Mediterranean—with a surprising crew—she quickly finds herself embroiled in a kidnapping, and up to her neck in bad guys; the problem is, just who are the good guys?