Where is the great divide in politics? The Authors Collection.

I may be the worst person in the world to review a book about personal political beliefs.

No newspaper, no radio, no online news, I don’t even watch the local news on television.

For me, there is no news — it’s all history.

I’m one of those who believe that voting is a waste of time because the top one per-cent of the one-percenters controls everything. Dare we call it conspiracy?

Some of my ilk believe that we’ve been screwed since the income tax passed during Woodrow Wilson’s watch. My generation has never seen a year go by that our military wasn’t engaged in either a war, skirmish, conflict, whatever. Our military always has someone in harm’s way.

On second thought, I may be the ideal reviewer for this book.

I believe we still have a chance.

But, in order to avail ourselves of that chance, we have to bridge the chasm between the increasingly polarized opposing ends of the political debate.

Maybe it’s too late. I hope not.

In the Godfather-Part 2, Michael Corleone said, “keep your friends close but your enemies closer.” It’s good advice for anyone interested in politics. If you don’t know why your opponent believes what he does, how can you understand him? How do we build a bridge across that great divide? We must create a path to the point where the bridge can be built.

A path is formed by laying one stone at a time. Aaron Barlow has given us an important stone to lay. In his most recent book, The Cult of Individualism: A History of an Enduring American Myth, Barlow offers readers an unbiased examination of the root causes of America’s retreat from reason, understanding, and acceptance in dealing with our political adversaries. Too many people have, for too long, taken the easy way out and cast inflammatory remarks across the aisle and turned a cold shoulder towards the opposition. Who is the opposition?

Barlow takes a new look at identifying the contestants. Rather than the more commonly considered North-South divide, he looks at what he considers a neglected force, East-West.

Consider the contrast in what he labels the “secular-liberal East coast elitists” with the rugged, self-reliant explorers who moved the boundaries of the country Westward. Furthermore, his research makes a solid case for his argument that today’s political movements (and their resulting divides) are based in cultural roots as much as current events and environmental factors.

What do Andy Taylor, Jed Clampitt, and Daniel Boone have to do with today’s Tea Party?

What is the cult and also the myth referred to in the title?

How does “individualism” relate to “anarchy?”

Which  ethnic group can be derided at will anywhere in this politically correct country with no negative consequences?

Barlow, who describes himself on FaceBook as “very liberal” and I (FB description “apolitical inactivist”) have something in common. We both believe it can be done.

If enough of us reach out to the other side, walk the path, and build the bridge, perhaps one day, rather than send vitriolic epithets to those who think differently, we can join forces and deplore those who refuse to be open to understanding others.

Please click the book cover image to read more about FCEtier and his novels, which can be described as political thrillers.

The Idle American: A Quiet Hero 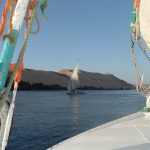 Darlene Jones: The Traveling Photographer on the Nile River