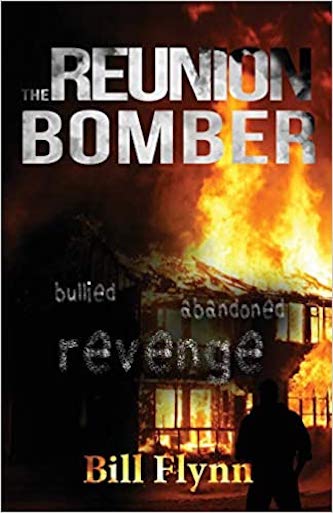 Hang on to your hats, this book will have you flying off the edge of your seat if you’re not careful! The interview by Judy Moreno, originally appeared in BookTrib.

In Bill Flynn’s historical fiction and thriller, The Reunion Bomber, Former FBI agent Ronan Ryan returns to Eastboro to attend the reunion of his high school class. A celebration with his basketball teammates and a pleasant encounter with his first love is interrupted by a violent act of vengeance.

The reunion restaurant becomes a crime scene, but the killer’s work is not finished. His other targets are all members of Ronan’s class, including his high school sweetheart and his friend, the Eastboro Chief of Police.

They join with a jailed computer hacker to try to find the deranged but clever garage dweller who methodically wreaks terror on the classmates of his past.

The reunion ends in 48 tense hours after the bomber makes his final detonation. Hang on to your hats, this book will have you flying off the edge of your seat if you’re not careful!

We interrogated (okay, not really, we very respectfully posed questions to) the author, Bill Flynn, about the inspiration that ignited his novel. He answered that, and so much more, in this fun interview.

Bill Flynn is an Air Force veteran and a retired aerospace engineer. He is the author of five books: The Feathery, A Drumbeat Too Near, The Beddington Incident, The Pocket Watch and his latest, The Reunion Bomber. Bill lives in New Hampshire. He’s a widower. When not writing, he travels the country to visit his five daughters. Bill has played imperfect golf on perfect golf courses around the world.

Q: Where did your idea for The Reunion Bomber come from?

A: My idea for The Reunion Bomber may have come from my growing up in a small town school system where I observed schoolyard bullying. I saw that same childhood bullying extend to a lack of self-esteem into high school where groups were classified with names like “Retards,” “Dorks”, “Geeks” and “Fags.” I was classified as a “Jock” and I’ve always regretted not taking a stand against schoolyard bullying and those dire classified names that came later on.

Q: What in your background provided you with some of the insights to put together the story?

A: For The Reunion Bomber, the observations relative to bullying growing up as a child and the resulting trauma it caused to some when they became adults.

Q: In The Feathery, you have switched gears and moved away from the “thriller” genre with a marvelous story about golf. What prompted you to take this different course?

A: I worked for a company in Europe for 10 years. Some of my off-time was spent playing golf in 11 countries there. But the plot for The Featherywas not all about golf. The plotting included suspense, mystery, romance, history, and foreign intrigue surrounding a criminal quest to own a valuable, antique feathery golf ball that was played during a match at St. Andrew’s in 1848.

Q: Who are some of the favorite characters you have created and why?

In The Reunion Bomber? Corkey Newcome, Chief of Police in Eastboro. He acts out his rage and guilt when Jennifer is abducted by the bomber during his watch over her. Dr. Spivac, the psychiatrist who is assigned to profile the Bomber. His statements are vague and underwhelming until he pinpoints the Bomber’s final destination to finally rise beyond his professor-nerdome. In The Feathery, Malachy Gallagher (a real guy & friend.) After golf we were having dinner with some libations at Turnberry, Scotland … Malachy kept repeating, “me mom is just across the bay in Belfast, I should jump on a ferry and visit her.” I made Malachy Gallagher a bad guy in The Feathery. After being involved in the kidnapping of a caddy, he becomes a good guy, and finally, in the story, I got him to visit his mum in Belfast.

Q: Who are the inspirations for your stories? People in your past? Just characters from your imagination? Other?

A: The Feathery: the character of Malachy Gallagher was real and a character from my past. The Reunion Bomber: Dr. Spivac (fictional) and Brian Bozniac, the jailed computer hacker (also fictional.)

Q: What part of the writing process do you enjoy the most?

A: I enjoy making the story’s plot come together and start to make some sense. I also like to make bad guys like Gallagher in The Feathery and the jailed computer hacker, like Bosniac in The Reunion Bomber, do some good things in the story.

Q: What would you hope for readers to take away from reading your stories?

A: In The Reunion Bomber, I hope the reader takes away and realizes the reality of the fact that adolescent bullying can lead to serious consequences in adulthood. And whenever and wherever they see it happening to put a stop to it as parents, teachers, and student peers. With The Feathery, I’d like the reader to take away the knowledge that juvenile delinquent teenagers can be rehabilitated by mentoring and turned around toward successful lives away from crime.

Please click HERE to find The Reunion Bomber on Amazon.