Inside the Literary Mind of Susan Clayton-Goldner 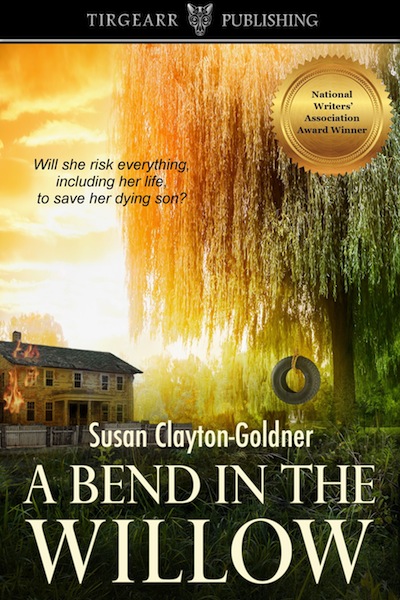 Stories are everywhere. It’s just a matter of finding the ones you want to spend years with.

Susan Clayton-Goldner was born in New Castle, Delaware and grew up with four brothers along the banks of the Delaware River. She is a graduate of the University of Arizona’s Creative Writing Program and has been writing most of her life. Her novels have been finalists for The Hemingway Award, the Heeken Foundation Fellowship, the Writers Foundation and the Publishing On-line Contest. Susan won the National Writers’ Association Novel Award twice for unpublished novels and her poetry was nominated for a Pushcart Prize.

Her work has appeared in numerous literary journals and anthologies including Animals as Teachers and Healers, published by Ballantine Books, Our Mothers/Ourselves, by the Greenwood Publishing Group, The Hawaii Pacific Review-Best of a Decade, and New Millennium Writings. A collection of her poems, A Question of Mortality was released in 2014 by Wellstone Press. Prior to writing full time, Susan worked as the Director of Corporate Relations for University Medical Center in Tucson, Arizona.

Susan shares a life in Grants Pass, Oregon with her husband, Andreas, her fictional characters, and more books than one person could count.

Susan: A Bend In The Willow is scheduled to launch on January 18, 2017. Almost all my stories start out as a question. This is the first question I asked myself when I began to think about A Bend In The Willow. What would happen if a teenaged girl, killed her abusive father, disappeared and completely reinvented herself?

What if twenty years later, that girl had found a way to go to college had married a good man and was raising a son? What if the little boy was diagnosed with a chemo-therapy resistant leukemia and would die without a bone marrow transplant? What if relatives make the best donors? What if neither she nor her husband is a match? What if she goes back to a town where she is wanted for murder in order to save the life of her five-year-old son? One question builds upon another until the story emerges.

Now that I’ve written a few books, it seems I most often write about themes of forgiveness and redemption. How a character finds her way back to herself.

Susan: I don’t think I decided to become a writer. I believe I was born a writer. I can’t remember a time when I wasn’t writing. Let’s face it, writing is isolating and doesn’t pay very well. I’m not sure many people would choose to write if they could avoid it or were of sane mind.

When I was a little girl, my father won a Smith Corona portable typewriter in a poker game. He gave it me. It came with 45 rpm records guaranteed to have you typing. It was the beginning of my life as a writer. I taught myself how to type with the help of those records and starting writing poems and stories. I’ve never stopped. I went back to college after my children started school. This time I majored in creative writing..

Susan: I would say to To Kill A Mockingbird had a profound influence on me because of Atticus Finch and the pureness of his vision—his knowledge he was doing the right thing—his willingness to fight for his client, even though he knew he couldn’t win. Atticus was a great character—obsessed with justice. I’ve learned over the years that obsessed characters are usually the most interesting.

Susan: I find ideas in my life. In articles I read in the paper. Sometimes I hear something on the news that triggers me to ask the “what if?” question. One time I was sitting on a park bench watching a little girl on the swing set. I had a terrible feeling—almost as if it was happening right in front of me.

Susan: Usually the story comes first. And once I have the story I create characters who will help me prove my premise or answer the central dramatic question. I will create a complicated history for them—a backstory—so that I get to know the character before I begin to write.

In the case of A Bend In The Willow—the central dramatic story question is: Will Catherine Henry face a past in which she murdered her father in order to save her son’s life? Since the main character has been deceiving her husband and everyone around her for years—it was important that her husband be a stickler for the truth. Jim Frey (How To Write A Damn Good Novel) calls this the unity of opposites. It makes the characters ripe for conflict and growth.

Susan: Somewhere between commercial and literary. My creative writing focus in college was on poetry, so my style tends to incorporate metaphor and simile. I make use of some poetic devices while trying to keep moving the story forward. I realize most readers are more interested in the story than in beautiful writing—so I strive to find balance.

Susan: For me, the most difficult part of writing a book is the synopsis. No kidding. I can write that 400-page manuscript, but when it comes time to write a one or two page synopsis, I’m tearing my hair out and opening the wine bottle.

Susan: I’m working on a 3-book series using the same detective. The books are a bit of a cross genre—a family drama in which there is also a murder or a kidnapping. I sent the first one to my publisher to see if they are interested. The second one is almost ready to go.

Please click HERE to purchase A Bend in the Willow.