Inside the Literary Mind of Susan Adger 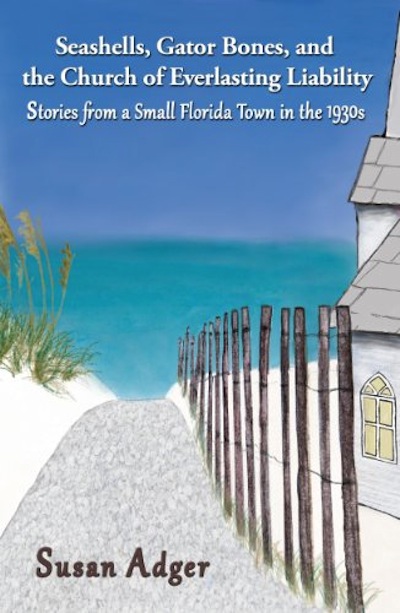 I wanted to write something light, that would make people smile, while at the same time, preserving a little bit of Florida’s culture.

Susan Adger, M.Ed, is a mother, former social worker, web designer, and fifth generation Floridian. She’s the author of two humorous books about 1930s Florida, drawn from stories told by her grandma, including her debut novel, Seashells, Gator Bones, and the Church of Everlasting Liability. She also cowrote the memoir A Quiet Voice about Vietnam veteran Eugene Hairston and his struggle to overcome addiction, post-traumatic stress disorder, and homelessness.

In a few of her personal adventures, Susan has found fossils in the Peace River in Florida and on Rainbow Mountain in Alaska, tramped for two days through a Philippine jungle to get medical supplies to the natives, and gone zip-lining through the jungle canopy in Costa Rica. She’s sipped high tea at the Peninsula Hotel in Hong Kong, trekked to the remains of an ancient castle in the Czech Republic, and gone skydiving.

She currently resides in Dunedin, Florida with her two cats, Jasper and Killer Girl.

Susan: Seashells, Gator Bones, and the Church of Everlasting Liability, consists of stories that were ostensibly written in the 1930s by the inhabitants of fictional Toad Springs, Florida. They were found in a dusty old trunk in the attic of the Church of Everlasting Liability when it was demolished in 1971, and church members decided to publish them. Each chapter is written by a different inhabitant of the town and they’re often in each other’s stories, with quite differing views of the same events.

I wanted to write something light, that would make people smile, while at the same time, preserving a little bit of Florida’s culture.

Susan: I started writing about fifteen years ago. I tried fiction, nonfiction, and even some poetry. What seemed to work best for me in the area of fiction was to just come up with a character, and without having a plot in mind, see where the story went. I’d literally imagine myself standing beside the protagonist as the front door opened, and we’d both see who was there.

Other writers kept telling me that I needed to “find my voice.” And when I finally did, Seashells… was the result.
Question: What book has been the greatest influence on you and your writing and why?

Susan: I can’t think of any one book that has a “greatest” influence on me, but I love books about families by authors such as Lee Smith, Bailey White, Garrison Keillor, Sheri Reynolds, and Barbara Kingsolver.
Question: Where do you find ideas for your books?

Susan: The idea for Seashells came from tales my grandmother told us about colorful old characters in our family and once I got started, the stories just seemed to almost write themselves. It was a pleasure to write… mostly.
In 2007 I co-authored a non-fiction book with Eugene Hairston called A Quiet Voice. When I heard his amazing story, I felt others could learn from his experience and asked him about writing it.

The memoir details his journey through the Viet Nam War, returning home with undiagnosed PTSD, drug and alcohol addiction, spending almost two decades in prison, and living on the streets for eight years before he changed his life. Today he works at the Bill Young VA Health Care System in St. Petersburg, FL and has often spoken at VA conferences around the country, encouraging some of the many young veterans of today to remember that “It’s never too late to change your life.”
Question: Where do you find ideas for your characters?

Susan: The characters in Seashells… are fictional, but as I mentioned, they’re based on old family stories. The individuals all see themselves as normal, rational people, but their neighbors don’t necessarily view them in the same light. None of the characters intentionally set out to hurt anyone else, but that doesn’t mean they succeed in keeping the peace.

Susan: I guess I’d describe the style in Seashells as informal, casual. The old Florida dialect is apparent and I recorded the book myself, so the dialect can be heard as well as read.

Susan: I guess editing is the hardest part for me. I never feel that a story is really completed because every time I read through it I find something to change or some new idea arises.

Susan: I have completed a follow-up book to Seashells that the publisher, Jason Aydelotte, has accepted, but the publication date has been delayed.