Inside the Literary Mind of Kathleen McClure 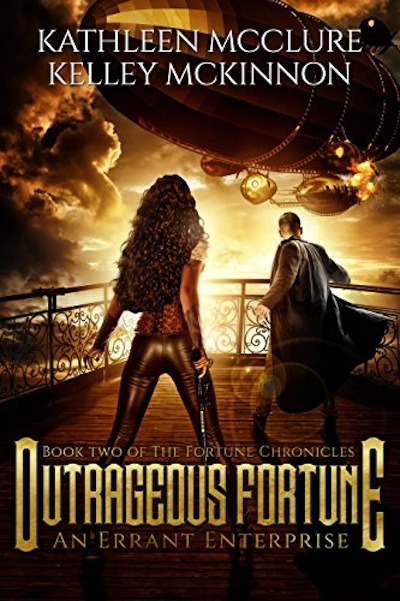 I’m back on the track of writing I first discovered at age 14.

On the planet Fortune, tech is low, airships and dracos crowd the skies, and everyone is out for their share of the crystal.

So when a mysterious woman offers the crew salvation—or, at least a paying job—John signs on, only to discover that neither the job, nor the woman, are what they appear.

Soon, the crew of the Errant are on the run and embroiled in hive of deception, while everything John hoped to save teeters on the brink of disaster.

Outrageous Fortune is the second book in The Fortune Chronicles, a genre-blending series of old-school adventures set on the engineered world of Fortune, a planet populated by conflicted heroes, complex villains, and canny shadow traders, as well as Sensitives—humans born with psychic abilities.

Today, I am interviewing Kathleen McClure, author of Outrageous Fortune.

Kathleen: I’m sure you don’t mean it to be, but that’s a loaded question, because generally my inspration starts with something small (and often ridiculous), growing into a fully blown concept as I write.

In the case of Outrageous Fortune, I wanted to expand on characters seen briefly in Soldier of Fortune, the first book of The Fortune Chronicles. The way I wanted to expand on them was to discover what crisis brought them into Soldier in the first place. In this way, Outrageous is less a sequel and more a companion piece to Soldier, and as such the books may be read in any order, with occasional events and characters in each book crossing over into the other.

That was the first, seed of the idea. After planting that seed, I enlised the aid of a fellow writer, Kelley McKinnon who, between her MFA classes and theatrical directing jobs, joined me in unrolling the plot: a heist gone wrong, with an ethically compelling Maguffin to go with the irreverent humor that drives most of my writing.

Kathleen: I started writing as a teenager, the natural follow-up to reading everything available from a young age.

Hitting college, however, I felt as if I had no good stories to tell, so I turned that imagination to the theatre.

I pursued this for quite some time, even moving to NYC to join an acting program and, later, becoming a fight choreographer—which is as cool as it sounds. It was not, however, a great way to earn a living and, beyond that, the more I worked in show business the more I realized I wasn’t loving it.

Fast forward a few years into marriage and children and the urge to create started rearing its demanding head once more. It was at this point, with the encouragement of a friend, I started to write again, and while it took years of practice and some truly awful first novels, I kept at it until some short stories got published, and Soldier of Fortune made it into the world and I’m back on the track I first discovered at age 14.

Kathleen: And there you go with the loaded questions. There are So. Many. Books. The Lady in the Lake, the entire JD Robb series, Guy Gavriel Kay’s Fionavar Tapestry…

Even narrowing it down to a single author (So. Many.), I can’t give you just one book, but I can hone in on Terry Pratchett’s Discworld series. In particular, those featuring the City Watch.

Mr. Pratchett managed to blend satire, mystery, action and pathos in such a way I would be laughing out loud on page and sobbing by the end of the chapter. His irreverence was freeing to me, as a writer. The fact is, without Discworld, I’m not sure Fortune would exist.

Kathleen: Mostly, I let the characters tell me what’s needed, but since I have an ecologically conscious society, I do spend a lot of time skimming science and innovation sites for eco-friendly systems. For instance, the airship Errant uses liquid aluminum batteries for power, and bacteria tanks for purifyng waste. The city of Nike has wind trees, magnetically powered trams, and riverboats with solar sails. Basically, I’m always bookmarking ecologically friendly innovations, hoping to find a place to use them in-story.

Character or plot-wise, it’s more organically grown, since I’m letting the characters tell me what’s next, and I’m often as surprised as the reader when a real-life parallel comes into play, as several do in Outrageous Fortune.

Kathleen: Remember, I used to be an actor, so I always start with the character in a scene, and I learn more about them by how they respond to their situations. Sometimes I have a visual of the character going in, other times their physical characteristics evolve as I go.

The most important thing for myself, when writing, is to have that character’s point of view, to be true to their experiences.

Kathleen: Mostly an immersive, bury myself in the character and discover, style. This prevents me from second-guessing every other sentence.

However, when I get into action scenes with multiple characters, or I know in advance there’s a necessary discovery or action required, I’ll use a sort of verbal storyboard—so I know who’s where, what they’re doing, and when they do it—and use that as a map.

Kathleen: I’ve finished Fortune’s Fool, the next Gideon Quinn story in The Fortune Chronicles, and I am in second round of edits of The Gemini Hustle, the first book in a new series that I like to think of as Man From U.N.C.L.E. meets Star Trek, written with L. Gene Brown.