Inside the Literary Mind of JoAnn Smith Ainsworth 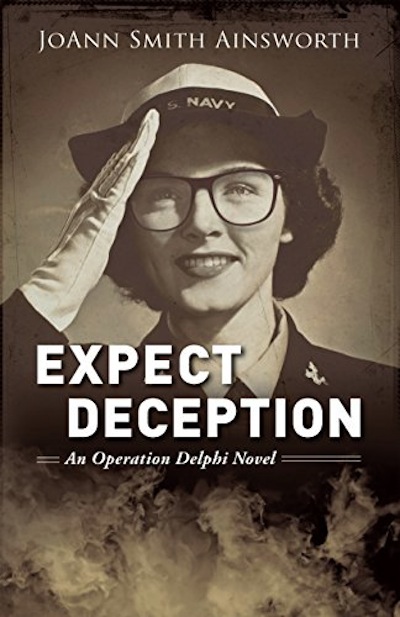 I write stories for readers who enjoy gripping suspense wrapped in other worldly experiences, with authentic historical settings, and told in the style of a cozy but at the pace of a thriller.

JoAnn Smith Ainsworth experienced food ration books, Victory Gardens, and black-out sirens as a child in WWII. These memories create vivid descriptions of time and place which put you in the midst of a fast-paced journey through paranormal realms as U.S. psychics hunt down Nazi spies.

Ms. Ainsworth lives in California. She has B.A. and M.A.T. degrees in English and has completed her M.B.A. studies. She has published five previous novels.

To learn more about this award winning author, visit http://www.joannsmithainsworth.com.

JoAnn: I am writing the third book of my paranormal suspense series, Expect Betrayal, wherein the U.S. government recruits a team of psychics to find Nazi spies during World War II.

JoAnn: My original goal was financial, as a means to make money to supplement my Social Security. I started writing at about age 57.

Having my education in English with MBA studies started me looking at writing as a second career. Little did I know how difficult it is to write a novel for today’s readers and how much I would have to learn to be good at it. I still take online craft courses to bring more depth into my writing.

Writing quickly turned into a passion. Even if I never sell another book, I will continue writing. The creative adventure brings me great joy.

JoAnn: When I first started writing, I wrote historical romantic suspense novels. The authors with the greatest influence then were Barbara Cartland for her flair with historical romance, Louis L’Amour for his action and fight scenes, and Robert B. Parker for the clarity in his writing while he builds up the suspense.

It didn’t take me long to learn that I write according to my own Voice. I no longer try to emulate other authors.

JoAnn: I enjoy writing in historical periods. I chose the time and location for my WWII paranormal suspense series because I was starting first grade when America joined the war. I remember air raid sirens, food ration books, Victory Gardens, and collecting and recycling every possible piece of paper, string, and metal. All citizens were focused on the war effort, if only to buy war bonds. I remember the fear of the times and the uncertainty, having just emerged from the Great Depression.

I chose Philadelphia for the location of the top secret facility because I lived in Philadelphia in the 1950s, and it had not changed much from the 1940s. Life moved much slower back then. I use some actual buildings and make up others according to the needs of the story.

My jobs early on out of high school had me working with engineers and scientists in top-secret facilities. I brought that understanding to my series.

In the 1960s and 1970s there were popular books about the race between the Soviet Union and America to work with the occult. In the late 70’s, I attended Berkeley Psychic Institute (https://berkeleypsychic.com/). All these life experiences helped shape the characters and the story, although I deliberately created different psychic talents to keep each of the five characters separate in readers’ minds.

JoAnn: I craft my novels. I don’t just sit down and they flow from my fingers. I put them together piece by piece.

The story question, the time period, and the location are in place before I develop the characters. The characters have to have personality traits consistent with their being able to resolve the story question. They must be able to stand up to the villain.

JoAnn: Readers have at times likened my style to Anne Frasier in Play Dead, Dean Koontz in Lightning, and Kristin Hannah for her historical detail.

I write stories for readers who enjoy gripping suspense wrapped in other worldly experiences, with authentic historical settings, and told in the style of a cozy but at the pace of a thriller.

JoAnn: The blank page. It takes months of thinking and research before I’m ready to put any words on a blank page.

JoAnn: Besides writing Expect Betrayal, I am on a mystery authors panel appearing at local bookstores and libraries, doing speeches as a member of Toastmasters, and cold calling at Indy bookstores with a paranormal/fantasy author so we can bring our latest books to the attention of booksellers and readers.