Inside the Literary Mind of Janis Thornton 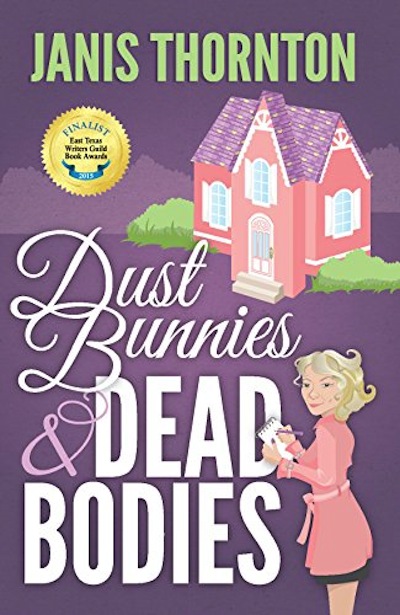 All writers weave strands of themselves into their writing, and I believe it makes their writing stronger, more vivid, personal, and unique.

Janis Thornton is a writer, personal historian, and journalist. She is the author of two local history books, Images of America: Tipton County and Images of America: Frankfort, and contributor to Chicken Soup for the Mother’s Soul 2 (page 189!). Dust Bunnies and Dead Bodies is her debut novel (a cozy mystery), released in October 2014.

She is a member of Sisters in Crime, the Indiana Writers Center, Association of Personal Historians, and the Midwest Writers Workshop Planning Committee. A 2009 MWW Fellow, she also was a finalist in the Daphne du Maurier contest that year. Her newspaper feature stories have been recognized by Women in Communications (Lafayette, Indiana chapter), Smiles Unlimited, and the Hoosier State Press Association. She lives in Indiana.

As reviewer wrote of her Dust Bunnies and Dead Bodies: The book is fast paced with snappy dialog that will leave you guessing right up to the end. The characters are very real and care about each other.

Question: Tell me about your newest book, and what was the inspiration behind it?

Janis: During my years as a reporter/editor at a small-town newspaper, I enjoyed a great relationship with the owner of the local radio station, even though, locally, he was my paper’s number one competition. When big, local stories broke, we both rushed to report them first.

So, as I noodled over storylines for my second book in the Elmwood Confidential series, Double Dare & Dead Air, I got to thinking: What if the owner of the radio station in Elmwood used his airwaves to ruin the reputation of townspeople he perceived as adversaries, threats, or competitors? And what if he was so despicable and so detested that when he ends up murdered, almost anyone in Elmwood could be the suspect — including my series protagonist, Crystal Cropper?

Qustion: Why and when did you decide to become a writer?

Janis: I can’t say I “decided” to be a writer. Writing was just something I always did. As a kid, I wrote plays, short stories, and poetry. As an adult, I wrote business-related materials, such as press releases, brochures, and ads. I didn’t try my hand at fiction until I was almost 40, when I took my first fiction-writing class at a nearby college. And wow! I loved it! I was hooked.

Janis: There have been so many books that influenced me — books that kept me reading into the wee hours, made me cry, creeped me out, had me laughing out loud, breathed life into characters I couldn’t shake. Some titles come to mind: “The Stand” and “Misery” by Stephen King, “The Bridges of Madison County” by Robert James Waller, “Talk Before Sleep” by Elizabeth Berg, “Watership Down” by Richard Adams, all the Kinsey Millhone books by Sue Grafton, and most recently, “Ordinary Grace” by William Kent Krueger. A great book, like all of these, inspires me to write stories that stir up emotions … my own and my readers’. And when I’m told I touched a nerve, there is no better affirmation.

Janis: While ideas are everywhere, I usually draw from my own life experiences, dreams, and fantasies for storylines and characters. For example, I worked as a small-town newspaper reporter and editor for several years. The job provided me endless opportunities to immerse myself in the fascinating events and people I covered and never would have encountered any other way.

So, when I started my Elmwood Confidential series, it was natural for me to fashion a protagonist with a newspaper background and to infuse her with the views and knowledge I cultivated in that arena. Likewise, the ideas for the plot, the setting, and many of the characters also were inspired by my years at the newspaper. All writers weave strands of themselves into their writing, and I believe it makes their writing stronger, more vivid, personal, and unique.

Janis: The narrative in my Elmwood Confidential series is first person, told by my protagonist, Crystal Cropper. You might say Crystal’s voice is composed of the “4 F’s of Folksy Fiction: friendly, flippant, funny, and frank. That pretty much sums it up.

Janis: Showing up every day until the book is done is really, really hard! It means planting my posterior in the chair day after day to crank out several hundred words, even when I know they’re all garbage, when I haven’t a clue what I’m doing, and when I can’t fathom where it’s going.

Janis: Book 2 in the series, Double Dare & Dead Air, is scheduled for release in January, and I’m in the very beginning stages of Book 3. Besides that, I am about to wrap a collection of fifteen historic true crime stories, all of which were committed within thirty miles of my Indiana town between 1860 and 1965. It’s been a fascinating project that has taught me the sinister side of human nature has not improved over time.

Please click HERE to read more about Janis Thornton and her books.