Inside the Literary Mind of D. R Ransdell 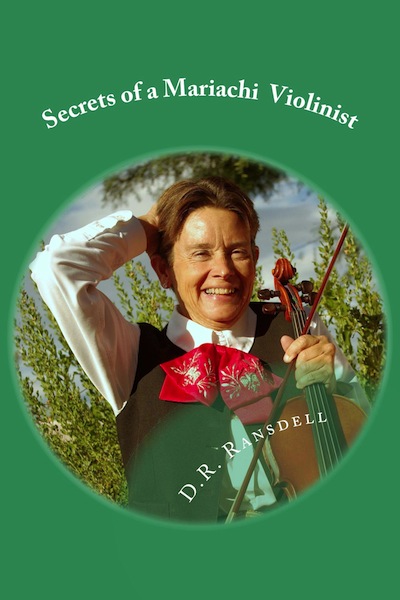 I guess I carry characters in my head a lot, and they’re always talking, so the dialoging comes naturally.

D.R. Ransdell is a writer, a traveler, and a musician. She’s also a night owl–how else could she get any writing done? Although she’s a native of Illinois, after a lovely stint in Mexico, she moved to Tucson, Arizona, where the sun is strong and the pools are especially inviting. By day she’s a writing instructor at the University of Arizona.

SECRETS OF A MARIACHI VIOLINIST

D.R. Ransdell would have never guessed that nostalgia for living in Mexico would lead her to join a mariachi band in Tucson, Arizona. Nor would she have guessed that learning by ear could be such a devilish challenge. The former Illinoisan recounts memorable gigs and describes the exasperating process of relearning technique and new musical traditions.

In MARIACHI MURDER, a dangerous woman, a guilty conscience, and a mariachi band in jeopardy add up to Andy Veracruz’s first adventure. In ISLAND CASUALTY, the mariachi violinist heads to Greece to relax. Instead of finding an island paradise, he’s soon embroiled in local politics he only thinks he understands. In his latest adventure, DIZZY IN DURANGO, a missing woman leads him to abandoned children and a crazy mariachi fan. Will Andy ever get any rest? Not in the near future….

In THAI TWIST, an elephant statue, a long-lost relative, and a charming native constitute a chase through Thailand in Gina Campanello’s first outing.

Today, I am interviewing D. R. Ransdell whose literary mind is like the little ball in a roulette wheel. You never know where it will land next. As one reviewer wrote about Dizzy in Durango: It is funny, a little scary, a little naughty, and immensely captivating. 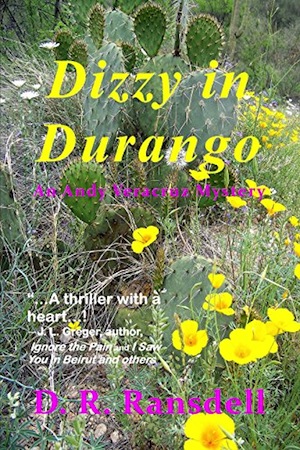 From D. R.: I’m just finishing Secrets of a Mariachi Violinist, which is a memoir about learning to play mariachi music. I used to tell a friend about my adventures with a mariachi band, and she kept insisting that I needed to write all that stuff down. Finally I did! We had a lot of adventures—bad gigs, surprise parties, etc. The biggest surprise to me was simply that none of the music was written down, and I had to learn every single darned thing by ear.

From D. R.: I was in second grade when I came home from school one day and announced I wanted to be a writer. Some people say, how can I stand it? In other words, I don’t make much money from my writing at this point and it takes a lot of work to write a few books. But I just heard that Freud (whom I don’t always trust) said that you’re never happy in life unless you’re fulfilling a childhood dream. So I guess I’m happy!

From D. R.: I read Dashiell Hammett’s The Maltese Falcon as a young adult, and I think I’ve been emulating him ever since. Not only is there crisp dialogue without too much description, but the culprits are a small group—practically a family. I think it’s intriguing to see tensions in such groups, whether they’re relatives, hobbyists, or, in this case, thieves and treasure hunters. I’m not interested in crazy serial killers—it’s the bad partners that intrigue me. The people you know and work with. The people who betray you. And I like the raw emotions in the book. Mostly the characters are driven by greed, but there’s also wanderlust. And they’re persistent. I have to give them credit for that much!

From D. R.: The ideas just come. Sometimes I “swim” on them. I know I want to write a scene, but I’m not quite sure how to proceed. I might have a vague idea for the scene in mind when I go for a swim. I get lots of ideas swimming. It’s like meditating—but more active!

From D. R.: They’re usually combinations of people I know. It’s fun to take real people…and give them a fictional twist. It’s funny though—people always “see” themselves in my books, but usually I wasn’t thinking about them when I was writing! In one case, a friend was sure I was using his wife as the femme fatale, but actually, my character is a lot more beautiful! (I couldn’t admit that to my friend….)

From D. R.: I write fast when I’m doing a first draft—then I go back and change most every word of every sentence. Sometimes several times. I especially like to write dialog. I guess I carry characters in my head a lot, and they’re always talking, so the dialoging comes naturally. I’m not so good at description—that’s usually what I skip in most novels.

From D. R.: The tediousness of YET another draft after I’ve already done five or so. At some point, I just want to be DONE! But then I find some inconsistencies, flimsy description, boring dialogue, etc.., etc. If you waited for a book to be perfect before you stopped with it, you’d never write a thing.

From D. R.: Right now I’m working on my fourth mystery. Andy Veracruz, the mariachi violinist in my mystery series, is currently fighting his way through Europe and Mexico to get to the bottom of the disappearance of a rogue concertmaster. To find out more about Liza, he has to go on a concert tour unexpectedly even though he’s not quite prepared for it!

Please click HERE to read more about Secrets of a Mariachi Violinist.