Inside the Literary Mind of C. S. Boyack 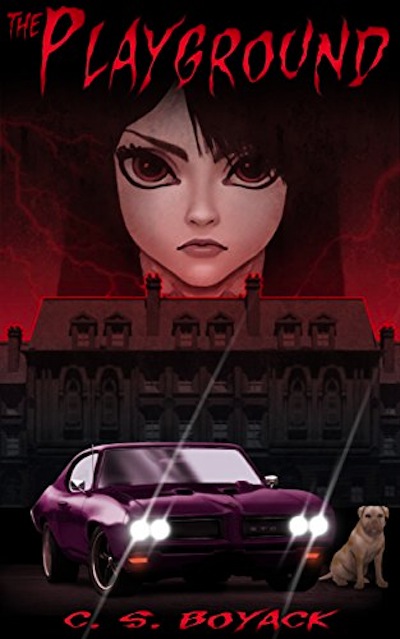 The hottest new toys of the Christmas season are the Playground Network dolls. They contain a worldwide social network for children. Except the network is controlled by a ruthless businessman with dreams of power.

To reach his goals he turns to the occult. Will our children make up his personal army? Could we have an enemy soldier in every home?

Gina Greybill is a cancer survivor who stumbles into her own brush with the paranormal. She wants nothing to do with it, but may be the only one who can bring down the Playground Network. To do it she’ll have to embrace her new situation, and recover the next generation of Playground software.

There is competition for the software in the form of a brutal thug named Clovis. He’s bigger, more ruthless, and more experienced. To top it all off, he has a head start.

The Playground is suitable for mature readers, due to violence and mature themes.

I am interviewing C. S. Boyack, whose work has been described as gripping speculative fiction. One reviewer said: The writing is gripping and vivid, some of the scenes brutal and raw.

Craig: I have a lot of projects going on, and this could be answered several ways. My last novel was The Playground. I wanted to weave together different viewpoints almost like a Frank Miller or Quentin Tarantino story. This one is paranormal though, and might appeal to some.

I also write a lot of short fiction. My last publication was a collection of short stories that include science fiction, paranormal, and fantasy tales. I tried to replicate the pulp era in some of them.

Craig: One winter we were pretty broke. Entertainment, even a movie, was kind of a luxury. I decided to write a book, and the rest is history.

Craig: I have no idea, but Jurassic Park played a big role. It was so innovative, and so cutting edge for that era. I wanted to write stuff that was five minutes into the future.

Craig: I’m sure that “everywhere” is going to be a popular answer, but it’s true. It could be a cloud bank, a song on the radio, or almost anything. I write about my Muse, Lorelei, all the time. I believe in Muses, and she hasn’t steered me wrong yet.

Craig: I like what I’ve seen in old movies. They include a bit of humor at times, and some pretty heavy themes in the same film. That’s like real life and I try to incorporate that into my writing. I also collect tidbits from real life and save them away to help my characters along.

Craig: Most of it is pretty fantastical, but there is an element of dark humor there too. Almost a “whistling in the graveyard” kind of humor.

Craig: Editing. Writing the first draft is pure joy. Revising it to something readers might enjoy is solid work.

Craig: I’m currently working on a long-suffering novel called The Yak Guy Project. It’s a story about a spoiled American kid who gets dropped into an alternate world and has to grow up fast. I’m also working on a collection of short stories that have an overarching theme of baseball. It’s some near future science fiction called The Enhanced League.