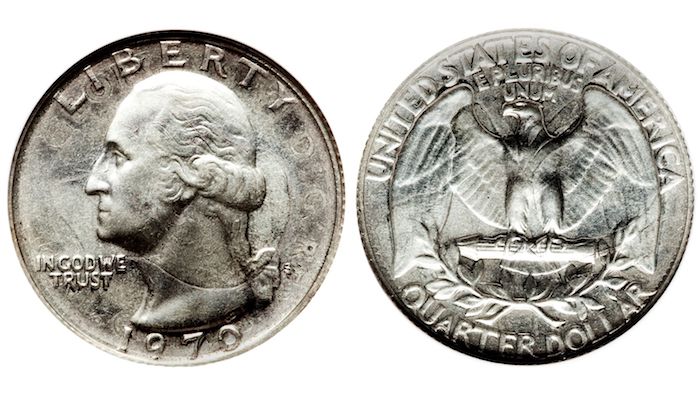 In his pool hall or domino parlor, my dad used the terms of two bits, four bits, six bits, a dollar when speaking of quarters, half dollars, or silver dollar coins.

On the playgrounds, we would learn “cheers,” and one I recall was “two bits, four bits, six bits, a dollars: all for the Eagles, stand up and holler!”

My dad used the terms of two bits, four bits, six bits, a dollar when speaking of quarters, half dollars, or silver dollar coins.  He owned several pool and domino halls through the years. A package of cigarettes had gone up to twenty-five cents, so when one was about to pay, the customer was told it cost two bits, which was a quarter. Two packages cost four bits, three cost six bits, and four were a dollar.

“The English colonies of America were prohibited by royal law from coining, minting, or even so much as using coins. The colonists were supposed to ship any and all coins to Mother England in payment for manufactured goods. This, of course, precluded any foolhardy colonist from starting a mint. Besides, there is little silver or gold to be had in New England and eastern Canada to this day. So, the English Colonies decided to use paper money which served them well until they attempted to finance the USA Revolutionary War with it. By 1780, this form of currency became useless and worthless and the money called Continental Currency collapsed.

“Immediately, part of the vacuum was filled by the milled Spanish-American silver issues based on the real system in denominations of 1/8R through eight-reales. The most widely circulated of these was the piece of eight, which, when supplies of smaller denomination coins dwindled were chopped or cut into smaller pieces to make change. Thus, one-eighth of eight-reales became one bit, one-quarter two bits – the equivalent of our present-day quarter-dollar. One-half is four-bits and three quarters are six-bits. Many believe these expressions to be slang, yet, history suggests they are perfectly good nomenclature.

“When making plans for a monetary system, the United States considered using one similar to the real system. This was because it was the most common system used in the USA at the time, and was familiar to most citizens. A system based on the piece of eight was agreed to and renamed “dollar” in the 1780s. To this day, in the USA we see the use of dollar or crown instead of “real” or “peso” even for modern Mexican coins.

“It was not until 1792 that the system became law in the USA, which coincided with the establishment of a new coinage system in the world. The introduction of the decimal system divided the piece of eight into one hundred parts or cents and became the standard for coinage throughout the world. The US Mint Act of 1792 provided for the first United States Mint, which was set up in Philadelphia.

The value of the coins has lessened as very little silver is even in these coins today.

I wonder if any of our grandchildren have even heard the terms or would understand their meaning.

In today’s world, our grandchildren are no longer expected to write in cursive and will probably never learn to count by “two bits, four bits, six bits, a dollar.