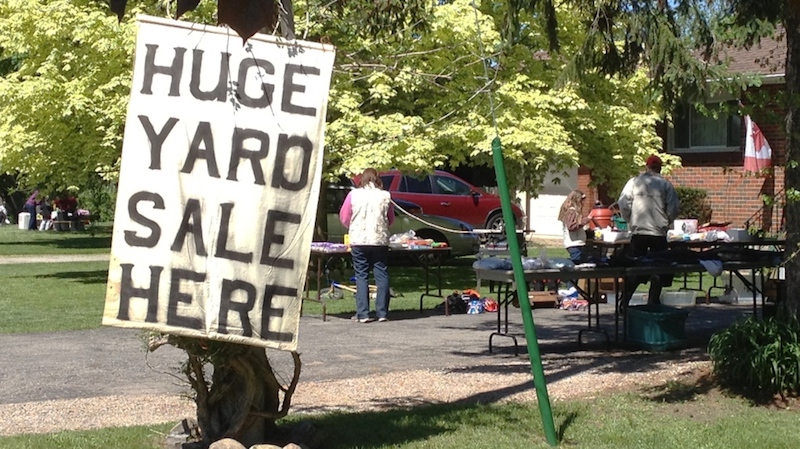 Yard sales are a great way to see old friends again and turn strangers into new friends. Isn’t that really what life is all about?

A wonderfully blessed day. Started out good and remained good.  Been up since the dark hours of one-thirty this morning preparing for the first day of the yard sale.  Got signs put out by six o’clock while still dark in order to catch the school traffic, and so Jimmy could drive me to put up the signs before he left to meet son, Lee, at his houseboat.

When Day broke, cars and pickup trucks were already pulling into the yard.  I made most everything very cheap, selling all clothes for a dollar and jeans for a dollar. You could fill a grocery plastic bag as full of clothes and fabrics as you wanted for four dollars.

I did not have the items on the tables but mostly in the totes. People started pulling them, rummaging through everything, and buying whatever they found. Maybe it was to display the clothes this way instead of having everything neatly arranged on tabletops.

Actually, that is what Harry Crowe believed. He was a Kilgore merchant when I grew up, and I worked for him on weekends.  He had a large tub of iced down cola drinks . . . cans piled every which and the brands all mixed up. I carefully began putting all Dr. Peppers in one section, Cokes, another section, RC Cola, Orange, Grape, 7-Up, root beer, etc. You get the picture.  I was so proud of myself. Each brand of drink could be easily located.

A little later, Harry walked into the store, took one look at the iced drink cooler, and abruptly asked, “Who did this?”  I happily stated that I did. He said, “Don’t ever do that again. people like to dig.” He quickly re-arranged all the drinks,  piled them on top of each other, and left them floating around in a disorganized fashion.  He said people liked to think they were getting the very last brand of drink as if they had found the jewel.

When I first started working at his store, I realized he sold alcohol on Sundays. The Blue Law was in force then, and he wasn’t allowed to sell beer on Sunday. I told him I could sell everything else, but in good conscience, I could not sell the alcoholic drinks. He didn’t mind selling the beer himself and sold a lot of it. His conscience didn’t bother them as badly as a few lost sales.  A few people would come into the store to purchase the alcohol, but most of the folks simply left church services, drove to the rear side of the building, and purchased their beer through the window.  I think that was the first “drive-thru window” in Kilgore.

I could see who all were in the car as they passed by the window, and I recognized many of the school teachers and church people who did not want to be seen making the purchases.

One Sunday I went to work and found the door was locked.  I contacted the female store manager and asked what was going on.  She said apparently Harry did not want to face me and tell me I had been let go, so he just didn’t unlock the doors. He found out I was a female cop and was afraid I was investigating him.

So, that ended my short time of working in a little grocery store.  (I had a full-time job working with the state and was working part-time for him to earn a little extra income).  At the time, I was the first female police officer signed up as a volunteer.  The State of Texas was hiring officers for a newly formed division assigned to investigate fraud in the welfare system.

Anyway, back to the yard sale. It went quite well.  I could not believe the amount of goods that had sold and were gone. I did not have high ticket items, like furniture but lots of little items priced cheap. I sold more items when they were piled up than when they were neatly placed and sized.  People are strange.

We never know what a person is looking for.  Some items had been at other sales.  I even sold some postcards of Rome I crammed in the totes on tabletops. Everyone sold for a dime apiece. I had considered trashing them. Who knew that a man who looked like a laborer could get so excited over those postcards?

I put out lots of figurines to fill in some space. One lady bought four of them. I showed her where some particular ones were broken, a hand missing on one, a chip on another. I had written “mended” on it so no one would think I was cheating them. She said she saw all those things, but she wanted them anyway.  I originally had a dollar on them but told her she could have them for twenty-five cents apiece. She said, “No. I want to pay you a dollar for each one.  She did not purchase any of the unbroken figurines.

We talked a little and I told her if I liked a figurine, I did not care if it was perfect, that none of us are perfect. I once had a little bride doll with a hand broken off. But if I covered it with a flower bouquet, she looks as good as new sitting on the shelf. She said she had done similar things. Partially turn it or placed it slightly behind another item so the imperfection could not be seen.

You meet the nicest people having a yard sale. That is probably why I enjoy having them even though they are a lot of work and very tiring.  I like people. I like getting to know them.  People will open up and talk, especially if it is mostly one on one.

One lady bought a lot of items. While we visited, she said someone told her that she was a miracle.  At first, she could not understand why. She had been born with only one eye. The other socket had no ball, so she has an artificial eye.  Her body is twisted, but she moves nearly as fast as the wind.  She said she thought about being called a “miracle.”  It seems when her mom was pregnant, her daddy hit her mother in the stomach really hard. Therefore, she was born with a twisted body and only one eye.  She indeed was a miracle to be even born under the circumstances.  She thanked the good Lord for her blessings.

Jonny and Koleta came by. He took the last toilet commode and planned on storing it until he needed it for one of his rental properties.  Jonny bought the KHS bulldog band blanket and Koleta purchased some of the micro-wave cozies, then talked to me about making some pillows for her children from their dad’s old big coat.

A young couple came to look over the baby items. She was pregnant with a girl.  They picked out a few items, and I gave her the baby blanket with “future bulldog is written on it.” It had been made from a little bulldog tee-shirt.  I also gave her a microwave cozy and told her husband he could take care of his wife by serving her meals in that little cozy.  I said, “So many times people are just thinking about things for the baby, but the mama likes to get gifts, too. She needs to know that someone is thinking about her as well.”  She lit up. Didn’t know this couple, but yard sales turn strangers into friends.

She had bought one of the little girl aprons with some small cows on it.  The girl’s mother said if I came across any similar cow material, she would like to have one to have an apron to match the one her granddaughter would be wearing.

One gentleman came every day searching for jeans in his size.  I finally located a pair. The waist was correct, but he needed a thirty-inch length.” These were thirty-four.  The jeans also had a large rip.  I told him to leave them and I would make the repairs. While John watched the sale, I came inside, cut the length to the right size, hemmed them, and repaired the rip, all for a dollar pair of jeans. I was happy, and he was happy!

Another stranger. Another friend. Isn’t that what life is all about?