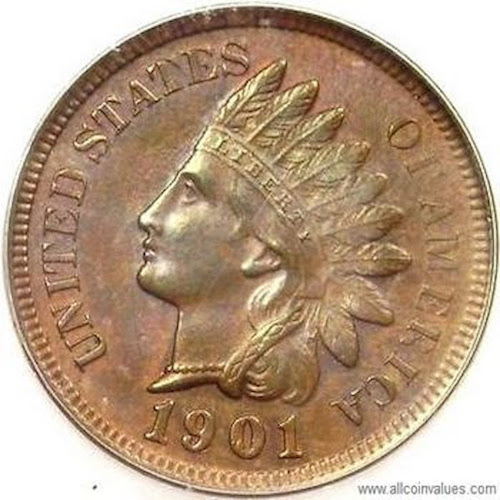 Through the years, and after moving many times, most of my coins have disappeared, so I was surprised when I came across the Indian Head pennies.

This morning, I have decided to tackle just one dresser drawer to try and “de-clutter.”  One drawer. That is my aim for today. It is surprising just how much “stuff” can be squashed down in that small space.

This particular drawer not only holds about thirty pair of new underwear, still with price tags, a dozen pair of new socks, old bank statements, a dagger I bought in Mexican while on a summer KHS band trip, secret letters (ha ha), a bunch of other “stuff,” and also money.

In small envelopes were two coins, a 1901 and a 1906 one-cent Indian head “Liberty” United States of America.  They are pretty worn so all details cannot be viewed like the examples shown here. But they are definitely very identifiable.

A happy smile came across my face as I recalled when I received these coins. I was early college age when I became interested in collecting coins.  Through the years, and after moving many times, most of my coins have disappeared, so I was surprised when I came across these.

Naturally, I had to go to my computer and google the information concerning the coins:

The obverse of the coin is surrounded by a denticled (toothed) border. It shows at its center the representation of Liberty, facing left and wearing an American Indian headdress made of feathers, and a pearl necklace.

The ribbon holding the headdress carries the inscription LIBERTY in relief. A tiny letter represents the artist’s initials (for James Longacre). It is in relief on the ribbon tying Liberty’s hair, between the lowest feather in the headdress and the curl going down her neck.

Around left and right, interrupted by Liberty’s headdress, the legend UNITED STATES OF AMERICA. Below is the date of issue: 1901.

After reading about these 1901 and 1906 coins, it is now time for me to get back to that “ONE DRAWER FOR TODAY” and make the decisions of what to keep and what to throw away.

Guess you have determined by now that it takes me a long time to “de-clutter.”  I get distracted easily and am one that does not like making decisions on my own….as I wuz just thinking