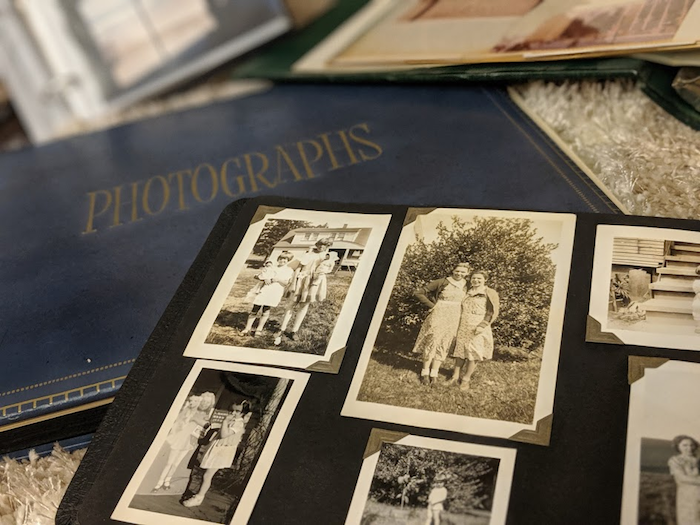 I am still enjoying my mother’s scrapbooks, her keep-sake of memories. They are snippets of her life that I can keep close to my heart forever.

My mother’s birthday was October 12. She was born on Columbus Day.  My mother, Lou Ella Patterson Mahurin, was the oldest of eleven children.

I’ve been looking through her scrapbook, created while she attended the Petersburg High School and reached the eleventh grade, (the highest grade they had at the time). I find a newspaper clipping picture of J.D. Webster, superintendent of the Petersburg school system. The article said he “has been informed by the State Department of Education that his high school is now a fully affiliated first-class Institution, having been given nine credits for the year’s work, making a total of 16.  The high school library is said to rank high with those in other Texas high schools.”

Mother kept a formal invitation in the scrapbook to the Petersburg High School Graduating Exercises on Friday Evening, May sixteenth, 1930 at eight-thirty o’clock, Auditorium.  Inside the invitation were the Class Motto as “To the Stars Through Bolts and Bars;” Class Colors, Rose and Gray; and the Class Flower, the Sweet Peas.

After Mother graduated from Petersburg High school, she moved and lived with her mother’s brother, Uncle Lude, and Aunt Lula Gambrell, where she asked to attend the twelfth grade at Estacada High School in New Mexico.  She attended that one year and graduated as Salutatorian.

Lou Ella returned to West Texas and attended the Texas Technological College in Lubbock.  Later the name was changed to Texas Tech.  I believe she attended for one year and then transferred to Denton, Texas, to attend the College of Industrial Arts in 1931.

This was an “all girl’s school” and later the name was changed to TWU – Texas Women’s University.   Postcards of buildings where she had her classes were in the scrapbook: Capps Hall and the Administration Building. My mother had most of her classes in the Administration Building.   They were on the fourth floor. There was no elevator.  She wrote that she had to walk up and down those stairs to the fourth floor from four to six times daily.

I remember when my oldest sister, Martha, and I were able to perform with other high school students from Texas at the TWU auditorium.  We both received badges to sew on our KHS band jackets.  Martha and I played the flute.  During that moment, I felt a real connection with my mother during her college days.

Mother, Martha, and I spent the night in one of the girls’ dormitories.  Before we left the dorm, mother placed little gifts on each of the dorm beds we had occupied as little thank you’s to the ladies who had allowed us to use their room.

Many pictures of her college friends are in the scrapbook, as well as other interesting photographs from the early 1930’s automobiles, a Mobile gas service station with its glass-type pumps, and a wheat harvesting machine placing grain into a horse-drawn wagon.

What else did I find?

A formal invitation to “afternoon tea,” a 1931 Valentine card, and several Christmas cards in envelopes with postal marks from 1931, a time when postage stamps cost only two cents each.

A picture that appears to have been a postcard had the following writing on it. “A great Texas gusher fire the most unusual picture ever taken in an oilfield snapped the instant the well burst into flames.”

A “love letter” from a beau, J.B…..prior to her meeting my Daddy.

Mother’s scrapbook is falling to pieces.  After looking at the pictures and the notes she had written beside her friends’ pictures, I can better understand why she always wanted to go to her class reunions.

Mother passed away in 1980.  Here it is now the year of 2021, and I’m enjoying her keep-sake of memories. They are snippets of her life that I can keep close to my heart forever, as I wuz just thinking.