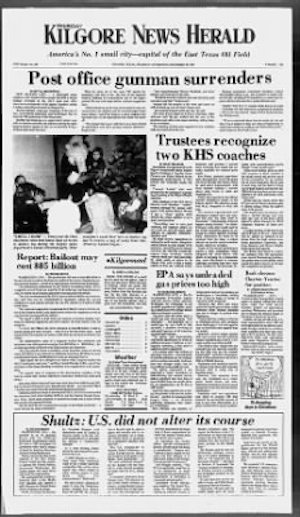 Every day, I made it a point to try and type faster because we were always under deadline pressure, and deadlines waited for no one.

In the early 1970s, my mother and I took typing courses at the local Kilgore Junior College.  Mother was seeking a job at the Kilgore High School library and needed to brush up on her typing speed to be eligible.  She took typing many years prior while attending the All Girls school, Texas Women’s University, in Denton, Texas, and had seldom had a reason to type since then.

I needed to look for work outside the home and realized I had very few business skills.

Mr. Harold Craver was the instructor in the night class.  It seemed that he and Mother spent more time discussing and exchanging recipes than honing her typing skills.  She did pass the class and was hired in the high school library.

I was hired by the Kilgore News Herald, the local newspaper.  I was pretty slow on the typewriter when I was first hired, but by typing eight hours daily, my speed and accuracy increased.

The fastest typist I have ever met was Peggy Reed Cubine.  Her short little fingers flew so fast, it was as if I was watching just a blur.  She encouraged me to be the best I could be, and I appreciated her.

I was allowed to take my lunchtime earlier than most so I could pick up my young sons from the Presbyterian kindergarten and drop them off with the afternoon babysitter.

When I returned to work, most of the employees were gone for their lunch, and I enjoyed listening to the conversations of owner Charles Duvall, editor Winston Gardner, and writers Mary Meador and Annelle “Nell” Dugan. The press operator was Mr. Mitchell.  They could be the funniest people.

When the lunch group returned, however, it was all serious business, and I went back to calling them “Mr. Duvall,” “Mr. Gardner,”  “Miss Meador,” and “Miss Dugan.” I wouldn’t dare use their first names at that time.

Working in a newspaper office was very stressful.  Deadlines had to be met on a daily basis. There were no excuses to miss one, and the deadlines kept coming. They never slowed down.  Get out today’s newspaper and start working on the next issue for tomorrow.

High stress reached its zenith late on Friday and Saturday nights while we waited to receive the final football scores, then get the stories typed, placed on the sports page, and printed.  Mr. Mitchell kept his press heated up and ready. Kilgore may not have cared much about what was happening in the rest of the world, but it did want its football scores.

After only about a year of working for the newspaper, my husband asked me to resign and stay home with the children.

I was proud of what I had learned while working for the News Herald and the friends I made.  But mostly, I was glad for the speed and accuracy in typing that I was able to achieve under deadline pressure. It was a valuable asset years later when I began working in a law firm ... as I wuz just thinking.