I Wuz Just Thinking: a friend’s trash became my treasure 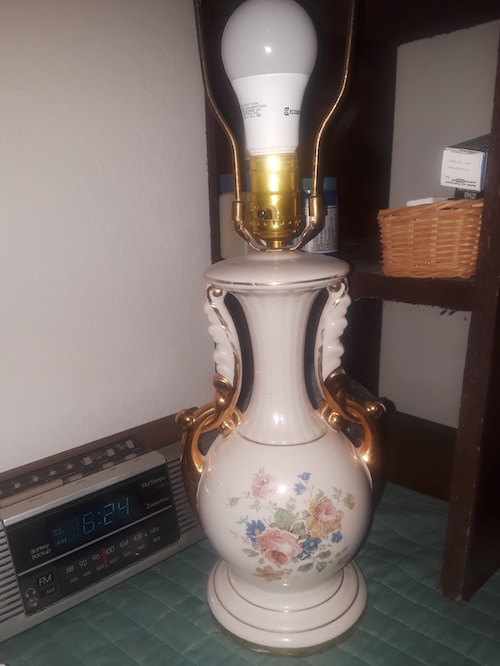 Sixty years later, the lamp still comforts me in the darkness, lights my path, and keeps me from stumbling during the night.

In 1962, I was a junior in high school.  My best friend was Barbara Raabe, and as my Dad drove me to school each morning, he would stop to give Barbara a ride.

Barbara and I had been best buddies since meeting in the first grade at Eastview Elementary.  We spent many hours, especially on the weekends, at her home or the home of her grandparents.  All were such wonderful people and were a big influence during my growing up years.

One day, as I left her house to walk the short distance to my home, I noticed her mom had already set out the trash next to the street curb.  There on the ground, next to the cans, was a dusty white porcelain lamp with roses and other flowers painted on it.

I guess I jumped in to what some call “dumpster diving,” which is the art of picking something up from someone else’s trash – even though there definitely was no dumpster!

I took the lamp home, plugged it in and the lamp did not work.  My heart sank. Even though I really had no experience and was not for sure what I was doing, I took the lamp apart, washed the porcelain, and immediately fell in love with this beautiful art piece.

I went home, restrung the lamp, and it immediately lit up.  I was so proud of myself.

I contacted Barbara’s mother, Crystal Williams, and told her I had taken the lamp from her trash repaired it.  I asked if she would like to have it back, and she told me I could keep it.  I was really excited because had given it to me.

In today’s modern world of computers,  and I googled the internet to find similar lamps of 1940’s vintage porcelain, those that had an urn style, double-handled floral flowers bouquet, and gold trim.  It stood about twenty-one inches tall from its base to its finial and was about five and one-fourth inches across the center.

I began thinking of the story about a blind man I had learned long ago. He went out at night and carried a lit lamp with him.  Some young men saw him carrying the lamp, and knowing he was blind, began making fun of him and heckling him.  They asked,
“Since you are blind, why do you carry a light?”

The kind man replied that he was blind and could not see the light, but he carried it so that others could see him on the path and not accidentally bump into him.  The young men understood the man’s words and apologized to him.

The moral of this story is easy to understand: Don’t judge others, think twice, and be kind to all.

Today, in the year 2021, sixty years later, that lamp still stands on my bedroom end table, always ready to comfort me in the dark and light the path to keep my feet from stumbling during the nights.