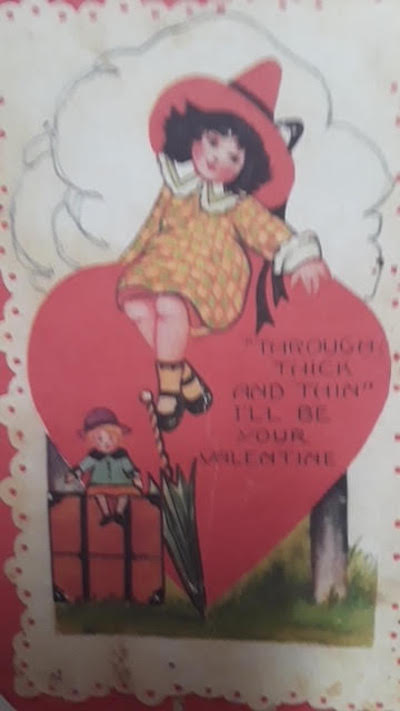 With patience and creativity, we can adapt old Valentine’s Day traditions to make new ones that, perhaps, are even better and more memorable.

“Through thick and thin”

I’ll be your Valentine.

So states the card with the picture of a little girl wearing a red hat and sitting atop a large red heart.  This is one of the postcards located in my mother’s college scrapbook dated in the early 1930s.

February 14th every year in the United States is Valentine’s Day, and it is a special day for many people, a day for people to celebrate their love for one another, whether it’s romantic or platonic. The day is usually associated with love, romance, flowers, chocolates, gifts, and celebrations.  Many marriage proposals are given on this date.

With that day soon approaching, being the second Monday in February, I was thinking about the “Circle of Cards.” In grade school, we were given the opportunity to draw on and cut out pieces of colored paper, then glue them on a larger sheet of paper to form a Valentine to carry home to our parents.

Usually, a party was given for the students by the mothers of each class. Days before the party, the teacher would send home a list of the students’ names to make it easier to address the store-bought packages of Valentines.

In the classroom, each child had brought a shoe-box from home and during the arts and crafts period, we would put our own name on it and then decorate the box to fit the festive occasion.  The box (or if no box, a paper sack) was decorated to hold the Valentines each of us received during the party.

Desserts for the class party consisted of large cookies shaped like hearts with red sprinkles on top, along with little paper cups of red Kool-Aid to drink. More often than not, there were also small candies for each child to carry home.

We brought little paper Valentines that had been purchased at a store so each student, as well as the teacher, would have one.  The really nice and more expensive Valentines were the ones with a candy sucker attached.  If you received one of those, you knew you were special to someone!

As the years passed and we grew older, we began receiving fewer Valentines, but the ones we received were either silly and from a best pal or words of love from a particular young lady or young man.

Then came cards directed to “My Wife” or “My Husband,” “To My Son,” “To My Daughter,” and “To My First Grandchild”, finally to all of the grandchildren and sometimes even to great grandchildren as families grew larger, both near and far..

Now, we receive cards from our grandchildren and great-grandchildren: “To Grandmother,” “To Grandfather,” etc.  The Circle of Valentine cards is forever growing and still blessed with memories and love.

For the past few years, the world has been inundated with what some would call a plague – the Coronavirus and its variants.  Although this pandemic has changed the way we celebrate, it has not ruined our celebrations. With patience and creativity, we can adapt old traditions to make new ones that, perhaps, are even better and more memorable, as I wuz just thinking.