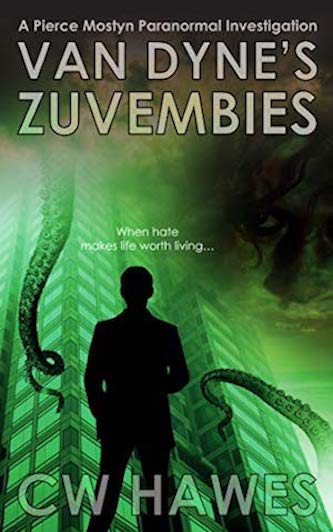 Van Dyne’s Zuvembies is a new slant on fiction, a graphic novel with words instead of pictures.

Valdis Damien van Dyne is back! And once again, the diabolical mastermind is preparing to launch a wave of terror as a prelude to taking over the world.

What starts out as a series of similar, but unrelated murders soon begins to take on the signature of van Dyne’s handiwork. But what has he unleashed on the world this time?

Special Agent in Charge Pierce Mostyn and his team race against the clock to find where the infamous Black Brew is being made to stop van Dyne from infecting New York and other large metro areas. But will Mostyn do so in time to save the world from nightmarish terror?

If you love weird fiction, horror, monsters, humor, action, and the Cthulhu Mythos, then this series is for you!

CW Hawes opens another door to the unknown.

And from the darkness, he writes, “came a sweet, et weirdly wordless melody. Just a voice vocalizing.”

Do you know the Zuvenbies are waiting?

His prose is chilling: “The grass hook held firmly in its right hand, the monstrosity raised the knife-like tool above its head. Steinberg knew she was going to die. This thing, this caricature of a woman, this Zuvembie was going to kill her.”

Van Dyne’s Zuvembies is a return for Special Agent Pierce Mostyn, one of the most creative heroes to step into fiction. He is the paranormal investigator for the Office of Unidentified Phenomena.

And he goes face to face with his old nemesis, the villainous Valdis Van Dyne who spends his days and especially his nights creating the most heinous creatures possible to lead his dark forces to world domination.

It’s imagination out of control.

Can Van Dyne be stopped?

Only Pierce Mostyn and his team have a chance, and even they don’t particularly like the odds.

They go where you fear to go.

And they go in alone.

Do you have the courage to follow them, to witness Armageddon as a battle that can only be fought between two men who match wits, then match their strengths, cunning, and power?

They know the fate of the world may rest in the hands of the one who walks away victorious.

But can anyone withstand the march of the Zuvembies?

The novels of CW Hawes aren’t quite like anything you’ve read before.

But you’ll surely read them again.

Van Dyne’s Zuvembies is a new slant on fiction, a graphic novel with words instead of pictures.

The terror is real, sometimes softened and sometimes heightened by wry, dark humor.

It is a story full of sound, fury, and conflict.

It is horror raised to a different level.