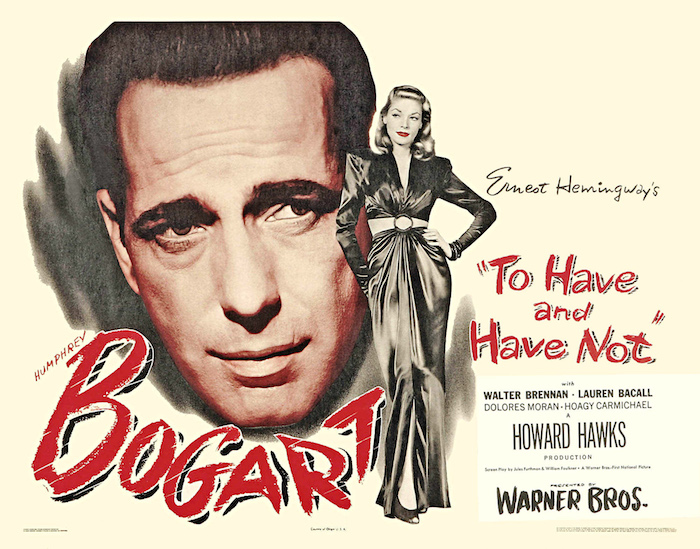 They were rivals. They were competitors. And they certainly didn’t like each other’s writing style.

One of my favorite motion pictures of all time is To Have and Have Not.

I never hear anyone else talk about it.

Perhaps I like the movie because it was based on an Ernest Hemingway novel.

Perhaps I like the movie because the screenplay was written by William Faulkner.

As far as I know, the film marked the only collaboration ever undertaken by two of the great literary figures of the twentieth century.

I’m surprised it ever happened.

He hated the book.

He wanted the story re-written.

He hired Faulkner to fix the story.

Faulkner wanted nothing to do with Hemingway’s book.

But he was broke and his books were out of print.

Hemingway didn’t give a damn.

He took the money and ran.

But he took the money and ran as well.

Hemingway and Faulkner were contemporaries.

And they certainly didn’t like each other’s writing style.

He pared down the language and made every word count.

He definitely believed that less was more.

And Hemingway always said his style utilized the principle of the iceberg, believing that as much as seven-eighth of the story lay beneath the surface.

He once said of Hemingway: “He has never been known to use a word that might send a reader to the dictionary.”

Hemingway was quick to strike back.

His sentences were too long.

They could be convoluted.

Faulkner never used a single word when a whole paragraph would do just as well.

His works were an entangled web and confused illusion of parenthetical prepositional phrases, and some of his sentences were a whole page long.

However, when an editor suggested hiring Hemingway to write the preface for one of his books, Faulkner said, “It’s like asking one racehorse in the middle of a race to broadcast a blurb on another horse in the same running field.”

He thought it would be in bad taste.

And maybe he was right.

Yet, Faulkner set aside any deep-seated animosity and did write a review of Hemingway’s 1952 novella, The Old Man and the Sea.

He wrote: His best. Time may show it to be the best single piece of any of us. I mean his and my contemporaries. This time, he discovered God, a Creator. Until now, his men and women had made themselves, shaped themselves out of their own clay; their victories and defeats were at the hands of each other, just to prove to themselves or one another how tough they could be. But this time, he wrote about pity, about something somewhere that made them all; the old man who had to catch the fish and then lose it, the fish that had to be caught and then lost, the sharks, which had to rob the old man of his fish; made them all and loved them all and pitied them all. It’s all right. Praise God that whatever made and loves and pities Hemingway and me kept him from toughing it out any further.

Faulkner gave Hemingway high praise, but it did it with long and laborious sentences.

Please click HERE to find my newest book, Confessions from the Road, on Amazon.