He never claimed to live the perfect life, but musically, he came close.

Glen Campbell made the most of his decision three dozen years ago when he accepted Christ, was baptized and rose to walk in newness of life. He was led beside still waters, restored and ultimately able to cope with Alzheimer’s. He dealt with life’s final storm on even terms during most of his last six years.

Aren’t we glad the gardener at his Scottsdale, Arizona, home invited him to church? The rest, as is said, unfolded in storybook fashion.

Campbell vowed to make his earthly exit with a smile on his face and a song in his heart. When he died recently at age 81, he left throngs of fans worldwide with tearful eyes and remembrances of his music “falling gentle” on our minds….

Dr. Richard Jackson, who retired as senior pastor at North Phoenix Baptist Church in 1993, shepherded Campbell for a dozen years. He knew him “up close,” and shared memories with me the other day.

“No person, entertainer or otherwise, has ever been more self-deprecating,” Jackson said. “He thought himself to be no better than anyone else, and was as kind, compassionate and considerate as any person I’ve ever known.”

Jesus Christ was their common denominator. They also had golf in common. For Jackson, it was when he had time; for Campbell, it was a passion second only to his profession. Campbell’s green fees were once “comped,” but Jackson had to pay. “The guy got it backwards,” Campbell joked. “He should ‘comp’ you and charge me. After all, I’m independently filthy.”…

At North Phoenix, Campbell was taken aback by the auditorium. It seats 6,000. “I’d love to have a concert here someday,” he admitted later. (Suggestion: On Youtube, use North Phoenix/Glen Campbell for numerous musical treats.)

Little did he know at the time that he’d present many concerts there. The church was always packed, and no money changed hands. His performances were “comped,” sort of “paying it forward,” sort of like his waived green fees, I suppose.

Jackson remembers a Palm Springs benefit where Willie Nelson was featured. Campbell was present, and he sang a few songs. Then, the Gatlin Brothers came on stage, and a jam session broke out. It was “spiced up” a bit by pianist/comedian Ray Stevens. They closed it out with Amazing Grace….

That makes good sense, whether or not we grew up as one of 12 children on a hardscrabble farm in Arkansas. The ground at the foot of the cross is exceedingly level.

The entertainment giant never thought himself to be a star. “Some fans say I’m country; others say I’m rock,” Campbell said. “Maybe I’m a combination; call me a ‘crock’.”…

Campbell spoke often of his childhood–in the midst of the Great Depression–before he headed for Hollywood. “I think people who knew Jesus figured we were too poor to hear about Him. Then, when I got a guitar and sold a few records, folks failed to tell us about Jesus because they thought we were too rich.”

He endeared himself to fellow musical artists and the world at large. Tributes have long abounded.

Campbell faced his demise with class and confidence. Before the disease got the upper hand, he made a farewell tour, calling it “I’ll Be Me.” There were 151 performances. Three Campbell children helped him during difficult moments….

Surely his mind was filled with memories of impacts made on a nation, and how his TV show, The Goodtime Hour, lifted our spirits.

And how about the movie made with John Wayne? True Grit entertained, and the storyline typified Campbell’s determination to entertain, thus providing a musical legacy that will long endure.

He never claimed to live the perfect life, but musically, he came close….

Dr. Newbury is a speaker in the Dallas/Fort Worth Metroplex. Inquiries/comments to: [email protected]. Phone: 817-447-3872. Web site: www.speakerdoc.com.

Don Newbury is the author of When The Porch Light’s On. Please click HERE to find the inspirational collection of stories on Amazon. 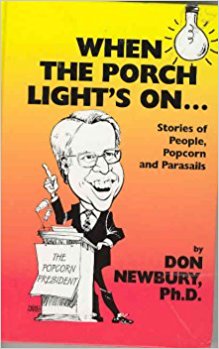