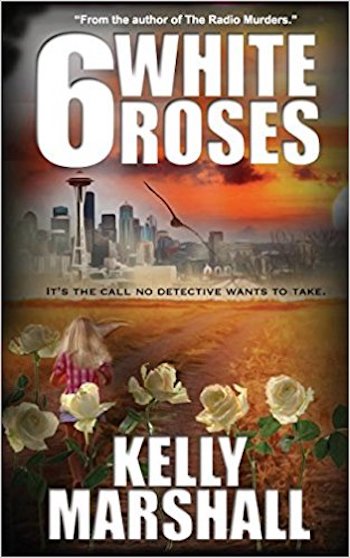 It is an intriguing, complex mystery, both engaging and sexy.

It’s the one call cops hate to get.  Seattle homicide detectives Nick Winston and Pat Strom are summoned to Lake Union to investigate the death of six-year-old Emily Chatburn.

Their probe unmasks a family’s darkest secrets. Nick becomes entangled in an obsessive web of lust and lies that threaten  to derail his career in law enforcement.

6 White Roses is a thriller served up for mystery buffs who like their murder sexy and sinister.

Strom spent a good chunk of the day perusing the computer for known sex offenders and their current whereabouts. Her ire grew as it became apparent the Department of Corrections didn’t know where at least a fourth of these animals were. Recent budget cuts in Olympia had hit the DOC hard, and career criminals were falling through the cracks. The public had no idea how much at risk they really were. And nobody in the DOC was going to be raising red flags publicly. The media would be merciless if they knew what a shitty track record the Department had keeping track of released sex offenders. But it wasn’t an easy job even in the best of times. These former inmates were like coyotes who hid in the daylight and came out at night to attack the unsuspecting and vulnerable.

But not the child predators. Their prey occupied the day. Before and after school, on the streets, walking and biking home with book bags bobbing on their backs. Even with warnings from frightened parents fresh in their heads, children were cajoled, coaxed, and eventually separated from their friends. Later, police discovered their lifeless, molested bodies in the woods, in the trunk of a car, or buried in a shallow grave.

One of those molesting bastards had found pretty Emily Chatburn all dressed up in a blue and white sailor dress for church on a Saturday night. Why had the child wandered outside in the dark? Or had she?  Maybe it was Mommy’s religious nut boyfriend. The man made Strom’s skin crawl. A controlling, misogynist abuser if she ever saw one. He reeked of it.

Strom stopped scrolling through the list of sex offenders. Jose Ibarra had been released several months ago when the McNeil Island Correction Center had closed down. A two-time Level Three sex offender, Ibarra was missing and hadn’t checked in with his PO. The ankle bracelet he wore so DOC could track his movements had stopped functioning weeks ago. His last known address was two blocks away from the Chatburn home. Too close for comfort. Strom put in a call to his parole officer and got voicemail. “Damn. Doesn’t anybody answer their phone anymore?” she grumped. She returned to the lengthy list.

Deputy McManus from Kalispell called back around four o’clock. “Seems our boy hasn’t been around in several months. The bartender in Whitefish said Chatburn had frequented the tavern since it was legal to serve him beer. He just upped and disappeared about four months ago. Varner thought he might be incarcerated or dead at the hand of a jealous husband. Seems Chatburn didn’t much mind if a woman wore a ring or not when he picked her up. And according to Varner, Cole used the tavern as his pickup place and had a hankering for blondes in tight jeans and cowboy boots. And the ladies seemed to like him too. In other words, he didn’t have to work hard at his pickups. He bought them a few beers and then out the door they’d go.”

McManus barked a laugh. “He caught Cole banging a cowgirl in her pickup in the parking lot. Said he knocked on the window and told the couple to get a room or at least get the hell out of his parking lot. Cole flipped him off and then kept doing the girl. Varner banned him from the Tavern for a month. Chatburn apologized, served his sentence, and the next month sauntered back in and returned to picking up the ladies. Said he acted like nothing had ever happened.”

“And the bartender had no idea where Chatburn went?”

“I asked him. Said he didn’t really know, but Chatburn has disappeared before. He chalked it up to the cowboy life. Those boys work the ranches for a few months and then move on. Sometimes it’s a tiff with the rancher or they get bored and find another job.”

“Chatburn’s here now, but he said he just got in town when his daughter died.”  Wonder how he heard about her death? Strom wanted to kick herself. It’s the one question she hadn’t asked him. She’d been too pissed off about Nick running off with Elizabeth Chatburn. She turned her attention back to McManus. “Thanks, Thom. I appreciate you helping me. You hear anything more, text or call me, would you?”

Strom dialed Cole Chatburn’s cell. The phone rang several times, then went to voice mail. She left a message requesting a call back. Their last conversation had ended on a terse note. He seemed like a man in bad need of a drink, and he had quickly wearied of Strom’s repetitious questions. In fact, his attitude had gone from helpful to downright hostile. She had to press him more. Get specifics. Had he said he’d just arrived in Seattle? Or had she assumed it? She needed to track down a date of when he arrived in town and how he found out about Emily’s death.

Nick walked in just as Strom slipped her laptop inside her bag and jammed a handful of paperwork on top of it. “Just heard from Deputy McManus. Cole Chatburn disappeared from his favorite watering hole about four months ago. With his penchant for booze, he had to be somewhere else.”

“He could have been holed up with a broad somewhere.”

Strom’s voice went up an octave. “Did you just say broad? When was the last time you had PC training?”

Nick smirked. “I could have said bitch, you know.”

“I’ve never heard you use that term.”

“And what if I called Elizabeth Chatburn a broad. What would your reaction be then?”

Nick turned his eyes away from her, and a blush climbed up his neck, rouging his cheeks. His mouth morphed into a thin, tight line. “That would be unprofessional.”

Strom kept quiet about Cole Chatburn for the time being. She had been remiss with her interview with the man and didn’t want Nick to think her incompetent. He seemed pissed about her comment about Elizabeth Chatburn and appeared far too fond of the lady. Strom could tell. Nick let his other head do the thinking when it came to pretty women. She’d bring him up to speed on Cole Chatburn once she tracked down some dates with Emily’s father.

The ride home was long and slow, and her mind had turned to mush when she walked into the apartment. Carina welcomed her with an arduous hug, and she found herself titillated with the press of her partner’s breasts against her. Her double D’s thrilled Strom, and she often fell asleep stroking them. It was a comforting habit that quickly put her under.

She woke in a spoon next to her flannel-clad partner. Carina never strutted her stuff in lace and pearls. Rather, she dressed casual in loose, colorful clothes and Birkenstocks. Her hair was long and flowing with a deep black shine. Strom loved to brush it while they relaxed in front of the TV, watching hours of the Discovery Channel. It smelled of the fruity shampoo she preferred. Pat kissed Carina’s neck and her lover stirred, then purred good morning.

Strom patted her butt. “No, let me. It’s my turn to fix breakfast. What’s your pleasure?”

Carina rolled over. “Just oatmeal and toast, querida. I’ll make the coffee. Muy fuerte, like you like it.”

The two women leisurely ate their cereal and substituted toast for blueberry bagels with peanut butter. Strom cherished these quiet moments with her lover. Carina was serene with a wicked sense of humor that surprised Pat even after all these years. Carina had an early shift at the library, so she showered first. As soon as Pat heard the water running, she dialed Cole Chatburn’s phone number again. This time, a gruff, raspy voice choked a hello.

When Strom identified herself, Cole growled his reply. “I’ve talked to you and your guy several times now. I’m done.”

“Detective Winston is not my guy, Mr. Chatburn. He’s a police officer. And you’re done with us when we say you’re done…” Strom heard a click followed by an annoying dial tone. “Prick.