Follow the words and see where they take you.

AND THERE IT SITS, staring you in the face during the darkness of an early morning.

But full of promise.

The promise is up to you.

It’s really not much of a battlefield, this blank screen.

But it can put up quite a fight.

A blank screen can be daunting.

It can strike fear into the hardest of hearts.

It demands you to do something.

It commands you to write.

So what do you do first?

What do you write first?

Too many writers take the easy way out.

I’ll think about it awhile, they say.

I need to better define my characters, they say.

I need to create a new plot twist, they say.

I need to create a plot.

What is the most difficult part of writing?

It’s putting that first word on the page. From that point on, you are committed.

Grab the first word that comes by.

There is no right word or wrong word, no right sentence or wrong sentence, no right or wrong opening.

So don’t worry about it.

Just throw down the first word, any word, and see where it takes you. You can always come back and change it later.

After all, as James Michener once said, “I have never thought of myself as a good writer. Anyone who wants reassurance of that should read one of my first drafts. But I’m one of the world’s great re-writers. I find that three or four readings are required to comb out the clichés, line up pronouns with their antecedents, and insure agreement in number between subject and verbs. My connectives, my clauses, my subsidiary phrases don’t come naturally to me, and I’m very prone to repetition of words. I can never recall anything of mine that’s ever been printed in less than three drafts. You write that first draft really to see how it’ going to come out.”

A story always takes a lot of turns.

You come to a lot of crossroads.

You’re on one road and then the other.

And sometimes you’re on the road that doesn’t come out.

E. L. Doctorow believed that “writing a novel is like driving a car at night. You can only see as far as your headlights but you can make the whole trip that way.”

You don’t have to see the end when you start.

The end will find you.

Caleb Pirtle III is the author of Secrets of the Dead. 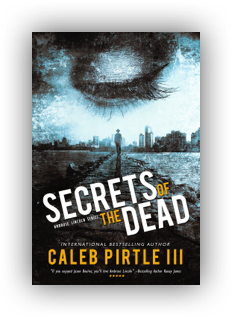