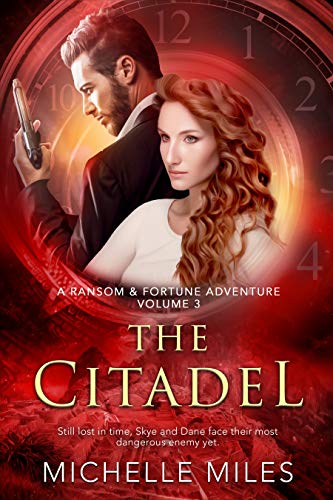 When Dane falls ill and Skye is captured, the true identity of Dr. Ridgewood is revealed and an old enemy returns to finish a job he started.

Still lost in time, Skye and Dane face their most dangerous enemy yet.

As Skye Ransom and Dane Fortune time jump for the third time, they leave the frozen tundra of wintertime behind, hoping to land in their own century.

That hope is crushed when they wake up in a jungle with oppressive humidity and a native tribe who mistakes Skye for the Goddess of Fire.

Arriving at the tribe’s village, they’re introduced to Dr. Charles Ridgewood who gives them the impression he is not what he appears.

While waiting for the time bender to reset, they’re honored guests of the Citadel’s royal family.

But when Dane falls ill, and Skye is captured, the true identity of Dr. Ridgewood is revealed and an old enemy returns to finish a job he started.

Now separated, the two have to reunite before they’re lost to each other forever.

And then, appearing before them, was a darkly tanned foot wearing a leather sandal attached to a leg with colorful beads around the ankle. She craned her neck to look up at the man who seemed taller than any other human she had ever seen. He towered over them, his head blotting out the sun and his features indiscernible.

From what Skye could tell, a richly colored material of red and gold wrapped around his hips. A long sash in the same colors crossed his hairless chest and was tossed over his left shoulder. He held a long spear, strange medallions tied around the end at the point. He looked down at them, speaking in an unfamiliar tongue.

Another man prodded Dane in the back with a spear and barked an order in his native language.

“Stay put,” he ordered and got to his feet.

Sitting up, she watched Dane stand nose-to-nose with the native, his hands in a surrendering gesture. The second native pointed his spear in her face, and spoke rapidly and firmly.

“Right,” he said through gritted teeth.

The native poked her in the shoulder with the pointy spear.

She rose and propped her hands on her hips, glaring at the man.

She had been right. He towered over her. His dark face was painted with white and red lines around the eyes and down the cheeks. He wore golden armbands, wristbands, a golden choker around his throat, and a large golden earring in one ear that stretched out his lobe. His eyes went wide as he sucked in a sharp breath. He fell to his knees, bowing at her feet. The other native followed.

“What the hell…?” She trailed off.

“What are they doing?” Dane glanced between the two.

“Maybe.” She placed her hand on the stranger’s shoulder, gave him a light pat.

He rose, bowed his head again, then spoke to his companion. The tall one reached for Skye’s hair, fingered her coppery locks between his thumb and forefinger, looking at his companion and speaking at an excited rapid pace.

“Hey, no touchy.” She pushed his hand away.

Why was it everywhere they ended up, the men had to touch her? Not knowing what else to call him, she mentally named this near-giant Tall Man.

Tall Man dropped his spear, put his palms together in a prayer position and bowed to her, saying the same phrase over and over.

It seemed as though he asked for her forgiveness.

“All right, all right,” Skye grumbled. “I wish I knew what they were saying.”

“Yeah, me too,” Dane concurred. “They think you’re something special, though.”

Tall Man picked up his spear and he and his companion urged the two of them to follow. The natives headed through the underbrush. When Skye and Dane failed to go along, Tall Man turned again, speaking to them and waving for them to come.

“I guess he wants us to follow him, eh? Do you want to see where he leads us?”

It wasn’t the weirdest thing that had happened all day, after all.

Please click HERE to find The Citadel on Amazon.