Featured: A High Price to Pay by Cynthia Hamilton 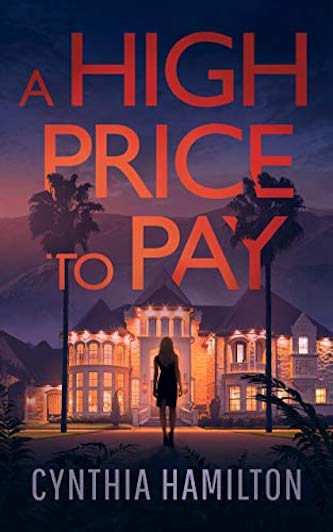 When Santa Barbara is rocked by two murders, Madeline Dawkins must race the police to find the killer, or she might be next.

It should be one of the highlights of Madeline’s career. As an event coordinator, a weekend-long birthday bash for the wife of a famous film director could help put her on the map across all of Southern California’s rich and famous landscape.

A dead body is found.

And soon after that, another.

Madeline will have to rely on her skills as a private investigator to put the pieces together. She and her partner, Mike Delaney, soon discover clues leading them to some very dark mansions…and even darker secrets.

A grim and terrifying chapter of Madeline’s past has been reopened, and a soulless predator is now on a quest for vengeance.

But while searching for the killer, she soon learns that these bodies aren’t random; they were meant to send her a personal message…

A HIGH PRICE TO PAY is the second installment in the Madeline Dawkins series.

Sampler: A High Price to Pay

Conrad Adams greeted Madeline and closed the door behind her. She hadn’t been in the D.A.’s office for three years, but the memories of the time spent there enveloped her like a vapor. She felt light-headed and sick to her stomach and had to fight the urge to flee.

“I’m guessing you didn’t call me here to talk over old times,” Madeline quipped nervously, returning the D.A.’s hesitant smile with a tentative one of her own.

“I’m sorry, but I wanted you to hear about this from me, and the phone just didn’t seem appropriate.”

“Please just tell me…” Madeline said, unconsciously sinking her fingernails into the fleshy part of her hand, bracing herself for the worst.

“Rick Yeoman just cut a deal with the Feds.” Madeline’s heart sank. Her face turned pale as the image of Yeoman holding a knife to her ribs flashed before her eyes.

“What do you mean…Yeoman’s going to be released from prison?” she asked in a voice she scarcely recognized.

“Next week.” Conrad Adams poured a glass of water from a carafe and set it in front of her. “He served up Lionel Usherwood on a platter, giving them new evidence that ties him to three other homicides, one of which also implicates Steven. It all checked out.”

“So they’re just going to let him walk?”

“It’s out of my control, I’m afraid. I did petition the State to release him in the Sacramento area, keeping him close to the prison and the State parole agent. But even that was shot down.”

“You don’t mean he’s coming back to Santa Barbara?” Madeline asked incredulously. The look on Conrad Adams’ face gave her the answer.

“I made sure he was restricted to North County.”

Madeline huffed as her gaze turned inward. She knew the people who cared about her wanted to make the nightmares end. But it really wasn’t as simple as that. The whole group of cheating, murdering monsters could die in a prison fire and it still would be hard to believe she was really safe from them.

“So…” she said, rising from the chair. Conrad followed her lead but waited to see if she was going to finish the thought. “I suppose you’ll be notified if Yeoman breaks his parole.”

“Absolutely. And he’s got to remain at least 35 miles from your residence.”

Madeline laughed harshly. “Oh, really? Is he going to wear a shock collar, like a dog?” she asked, her tone hard and cynical. She didn’t have as much faith in fairytales as the D.A. pretended to. “What do I do if I run into him ‘in my zone’?”

“Contact me immediately. If he breaks the terms of his parole, he goes back inside.” Madeline tried to hold onto this hopeful thought. “I’ll keep you informed, I promise,” Conrad said as he walked her out to the lobby.

“Thanks. I’d appreciate that.”

As the D.A. watched Madeline cross the street, he had to admit she was too much of a realist to buy his spin. Nobody could anticipate what would happen once Yeoman was released, and there just wasn’t the money or manpower to shield her at all times. But he also doubted that Yeoman would come after her; the real threat to her safety was that sociopath Usherwood.

Lionel Usherwood stared out at the Gulf of California from the deck of his ramshackle house in Baja California, disposable cell phone to his ear. He listened without saying a word as the caller gave him the news he’d been expecting.  He ended the call and set the phone on the stone ledge and smashed it with a rock. He gathered up the pieces and dropped them down a cistern, watching them sink to the bottom.

After three years of lying low, living off the proceeds of various illegal enterprises, it was time to take care of the past. He walked up the dirt path to the shed his German lady friend had converted to an art studio. Erika glanced over at him and returned to her work. Usherwood leaned against the doorway and watched as she smeared cobalt blue paint across the canvas with a palette knife.

Usherwood had never had the slightest inclination towards sentimentality, a trait he had in common with Erika. He’d had countless one-night stands, but she was the first woman he’d ever lived with. As he regarded her, he wondered if he’d ever see her again. He figured it probably wouldn’t matter to him one way or the other.

“I’ve got to drive down to La Paz,” he lied, not that any excuse was necessary. They were both as independent as cats.

“Okay,” Erika replied, her eyes not leaving the work in progress.

Usherwood left the studio without another word. He went back down to the house to pack. Most of what he would need he’d buy once he crossed the border at Mexicali. He put a few personal items in a small duffle bag, then pushed aside the armoire to access his stash. He took out his pocket knife and pried the 12-inch Saltillo floor tile loose. He removed four packs of fifty one-hundred-dollar bills and a second forged passport and spread them out in the false bottom of his bag, then restored the tile and moved the armoire back.

He activated a new disposable phone before leaving the house, then headed out to the old Renault. By this time tomorrow, he’d be in Santa Maria, California. He shifted into neutral to let the car ease down the steep, rutted road, then started the engine on the fly.

Please click HERE to find A High Price to Pay on Amazon.