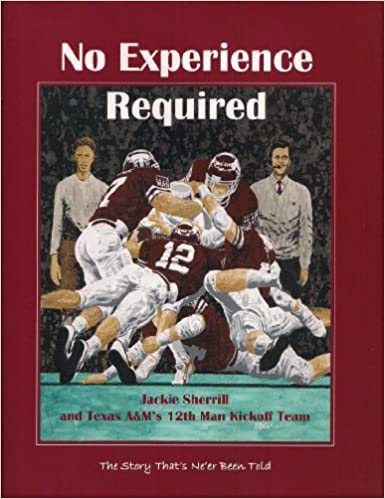 Several years ago, I wrote a book, titled No Experience Required, about the 12th Man Kickoff Team at Texas A&M. It was a band of walk-on football players, the inspiration of Coach Jackie Sherrill, who defied logic and the odds to become legends in the heritage of a university that strongly believes in the spirit of its 12th Man Tradition.

Now ESPN Sports has brought my book to television.

It is airing a documentary, also entitled No Experience Required.

It can be found streaming on ESPN.

It is being shown at several random times on the networks “Historical Stories” series.

And the documentary can be found here on YouTube.

“Even at Texas A&M, which revels in lore and tradition like few other places on Planet Earth, Jackie Sherrill’s 12th Man Kickoff team of the 1980s continues to hold a particularly exalted place in maroon hearts.

“No Experience Required, based in large part on Texas writer Caleb Pirtle III’s 2008 book. It is a tale that is unique in college football lore.

“Pirtle, a prolific author added context to the film from his interviews with more than 60 kickoff team members for his book. Director Kenan K. Holley said Pirtle “was sort of the spine of the film, and he helped us get connected to a lot of people.”

The story of the 12th man kickoff team is one of personal triumph and occasional tragedy.

Some memories and recollections have dimmed with the years.

Others remain as vibrant as the day they occurred.

And the complexity of the truth lies deep within the woven layers of fact.

Perception so often is founded on truth that has been colored by layers of high anxiety and high excitement that people recall or choose to recall.

For them, life was at its pinnacle. They were playing football, college football, big-time football, Texas A&M football.

The truth for others may have suffered from the dismay of a few bad days, hard times, bruises, and disappointment.

Coach Jackie Sherrill wanted to connect the Aggie student body with his football team as Texas A&M was fighting to regain prominence in the sporting world.

He recruited a bunch of volunteers from the school to run down on kickoffs and tackle some of the finest, All-American, Heisman-Trophy winning running backs in the country.

They were too small.

They were too slow.

They didn’t have scholarships.

They didn’t belong on a big-time college football field.

But they went out every day and practiced against great college athletes, and they suffered greatly – sprains, broken bones, concussions – but they endured, and nobody quit.

They thought their football career had ended in high school.

Sherrill gave them a chance when no one else would.

And they were forever indebted.

None of them ever really knew Sherrill.

None of them ever had many if any conversations with Sherrill.

As one said, I can count every word I ever spoke to Coach Sherrill on one finger.

They respected him. They became his disciples.

He taught them the game.

He taught them about life.

He taught them how to be better than any of them thought they could be.

He made a difference.

Their day in the sun was a magical time.

They were the little engine that could in a world that said they couldn’t.

They were the student body.

They were Texas A&M.