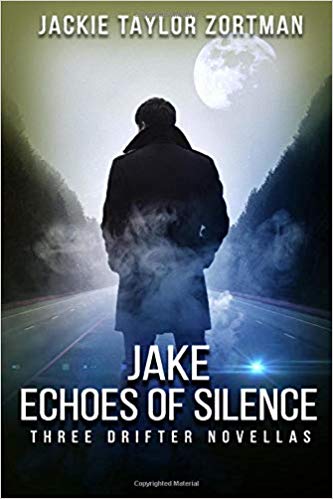 Jake will be remembered as one of the most unforgettable and enigmatic characters in today’s literature.

In Jake: Echoes of Silence, Jackie Taylor Zortman, in essence, has written a three-act play that follows the tormented and sometimes desperate journey of a fireman, a smoke jumper, who has returned to the high country of Colorado because he is at the mercy of a fate he cannot control.

No one has a clue.

What is he doing in Colorado?

Even Jake is at a loss to understand why his journey takes him to so many crossroads in life.

He is, as the author says, drop-dead gorgeous.

He rides a Harley.

Why does he ride out of the darkness and into a town filled with strangers?

But then, his whole life is a riddle unsolved.

He gives his heart away.

But no one can hold it for very long.

Jake has a secret.

But Jake will be remembered as one of the most unforgettable and enigmatic characters in today’s literature. You don’t want to miss a word in the three novellas that make up Jackie Taylor Zortman’s Drifter Series.

Perhaps, but it all seems so real.

There’s a crisis somewhere down a winding road.

Come along with Jake.

Jump on his Harley, hang on tight, and take a wild and unpredictable ride into the unknown.

Where is he going?

But don’t let him leave you.

There’s a surprise waiting around every twist or bend in the road.

Jake rides his Harley into Kimble, Colorado. He’s single and intends to remain that way.

He wants nothing more than water with ice and food for his rumbling stomach.

Inside a café, he finds someone he was not looking for who causes him to break his rules.

When a wildfire ignites, Jake is the only one prepared to fight it and takes control.

His landlady quickly adopts him as her pseudo-son and he accepts her as a mother-figure.

Are the answers to it all simmering inside the fire or is it something more?

The ending will shock and surprise you.

Jake is on a ski trip to Telluride, Colorado, from his Idaho job.

He falls in love with the western slope terrain and decides not to leave.

Not finding a firefighter’s job, he becomes a Fire Investigator for the Sierra, Colorado PD.

He meets a mystical free-spirited older woman in the local bookstore where she works.

By coincidence, her stunning daughter becomes his neighbor in adjacent hotel apartments.

They develop a sizzling no-strings-attached relationship and spend much time together.

On a trip to Redstone, Jake uncovers the answers to many questions in his primary case.

As he prepares to leave Sierra, he is the one shocked by the secrets revealed to him.

Jake returns to Kimble, Colorado, to finish old business. He learns that his secret has been revealed by his former landlady and the woman he loves.

He discovers his love interest is involved with someone new and hesitant to accept him. In the ashes of his former abode, he creates the answer to the owner’s problems post-fire.

Another wildfire breaks out and Jake finds himself saving the man who is his competition.

Security cameras reveal a surprise that turns things around for Jake’s mission.

Will he finally be able to settle down, or will he be forced to remain a vagabond?