The Daily Reviews: The last Ride by Linda Yezak 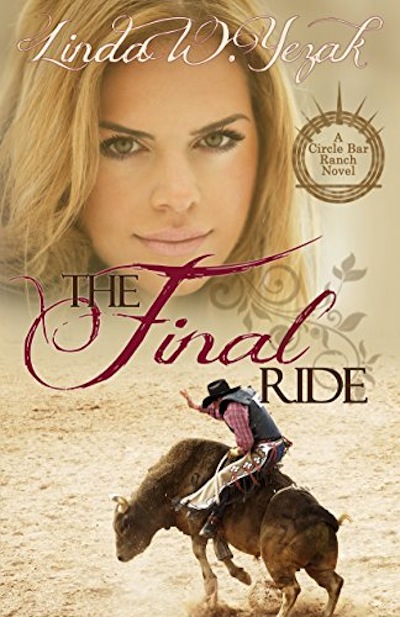 When you inherit a ranch in Texas, what are you gonna do? Well, fall in love, of course.

Patricia and Talon find there’s no smooth ride through life. Something as innocuous as a favorite aunt arriving unexpectedly sends their relationship spinning in the wrong direction. When Aunt Adele’s meddling causes problems for the two, they must decide if they should cling to what they believe to be true about one another or let the interference send them in opposite directions. Riding an angry bull is easier than what they face!

*Linda Yezak does an excellent job writing from a man’s perspective—regardless of which male character it is.

*The characters’ fears are presented in a natural way, not forced or artificial, and the author doesn’t exhaust the reader with reminders of those fears every page.

*The scene about the final ride is the best. I was there every minute—both on the bull and in the stands. That alone is worth the read.

Whew! After a few weeks of reviewing really serious books, it’s kinda nice to have one with a bit of humor and romance and only a bit of nail-biting tension. Just enough, you understand.

I hope you read Linda Yezak’s first book in this series, Give the Lady a Ride, because it beautifully sets the stage for this book. Patricia Talbert is a city girl, a politician’s daughter, and totally unaccustomed to getting her nails broken and dirty, but when you inherit a ranch in Texas, what are you gonna do?

Well, fall in love, of course. With Texas, but also with the muscular and handsome foreman of her ranch, Talon Carlson. In this book, we find both of them back again. They’re engaged, but she’s really so not ready for marriage. Her first one really soured her, and if the cheater hadn’t died she would have divorced him.

Patricia also has terrifying memories of Talon being badly hurt the last time he road a bull. He’s promised he won’t ride again, but that promise rankles. Guys are accusing him of being too cowardly to mount another bull. All his friends (except his beloved) are urging him to give it a go. He also doesn’t want to buy an engagement ring for her from the paycheck he gets from her. A big purse from winning would cure that–but he’d have to break his promise.

Which she doesn’t want to do. Despite her best friend, her favorite aunt (who arrived on the scene to chaperon her), and lots of other friends who advise her to change her stance or risk hurting him more than last year’s bull did.

What’s a girl going to do?