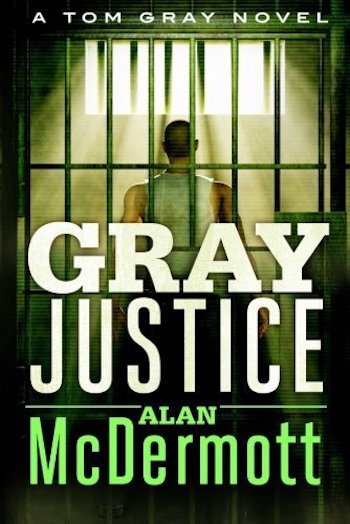 An intricate tale of military preparedness told with devilish and cunning accuracy.

When ex-soldier Tom Gray loses his wife and child to a career criminal, it seems life can’t get much worse. But when the killer is let off with time served on remand, Gray knows there is something fundamentally wrong with the justice system. Engaging the help of his ex-SAS buddies, he kidnaps five repeat offenders and asks the public to vote on their fate: Should they be allowed to continue their criminal ways with inadequate punishment, or has Britain had enough?

His website attracts a worldwide audience and, although the authorities know where he is, they are powerless to stop him.

Can Gray carry out his audacious plan? Will Andrew Harvey and his fellow MI5 operatives find a way to stop him?

Gray Justice, the first book in the Tom Gray series, is more than a simple tale of revenge: it’s a rollercoaster ride with an ending you’ll never forget.

This is an ingenious plot, with some surprising but well thought out twists and turns. The pace is fast, and all aspects of the book appear to be well researched – so much so that you might wonder if the author had himself been a member of the SAS. Gritty and brutal in places, McDermott paints very strong visual images throughout the story. I loved the idea of Tom Gray being more than just your average vigilante.

When a writer puts together a techno-thriller, he or she takes on a certain obligation: whether they know the technical specs or not, they need to deliver on the authenticity. Gray Justice delivers. Alan McDermott weaves us an intricate tale of military preparedness with devilish and cunning accuracy. McDermott’s prose is easy to understand while still delivering the thriller punch!

When I first started reading this story, I actually put it away before I got through the second chapter. I was sad to read about a certain event, but I went back to the story wanting to give it a second chance. The story turned out to be a pleasant surprise for me. I learned that the beginning is highly important and is the reason for Tom Gray’s actions. I was on Tom’s side most of the time, and eventually, I came to truly understand that in a way he was only trying to fix what was wrong.

This story has a strong technical and mechanical feel, but there is also something more. The lead character, Tom Gray, believes in the good of human beings, even though his life has been torn apart by a careless one. He wants to wake up not only his country to crimes against humanity, but he is trying to create a positive change. His methods are extreme, but it resonates and captures the attention of the “citizens” of the story, and of course, it grabs my attention, too.

The only drawback I read was the almost unemotional part of Sally and her struggles. What she went through for her country was by no means easy, and I think that Mr. McDermott could have written it with a little more emotion or fear. She was key in this story, and in my opinion, it was undermined.

Overall, I thought Gray Justice was an awesome story. I loved the cover art and title, it described the story perfectly. Very talented writer. I may even indulge in the next story.