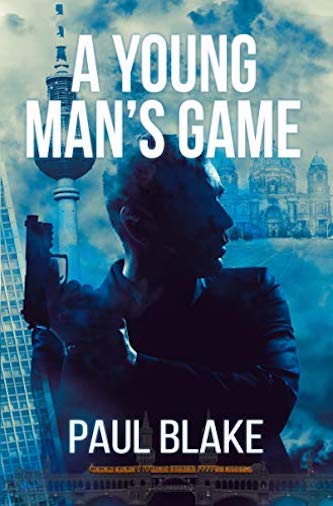 Filled with action that holds your attention and characters that make you experience the entire wheel of emotions.

Alec Foster is no Jason Bourne.

He is Head of Section in Berlin for MI6. He is fifty-one, and a borderline alcoholic counting down the days to retirement.

Alec is told of a plot to assassinate a British Minister and that there is a traitor in MI6.

As he tries to uncover the traitor, he is chased across Berlin by the assassins, the Russian SVR and the Berlin Police. He must use his long-forgotten skills and push his body to the very limits to survive.

He comes face to face with actions from his past, as everything and everyone he cares about is threatened.

Praise for A Young Man’s Game

“Paul makes quite a splash with this, his first book. The detail he has put into the story is phenomenal.” – John Prescott, Author, After, Preservation Protocol, and Something Deeper

“Paul Blake’s A Young Man’s Game is filled with action that holds your attention, characters that are relatable; relatable in the way that they make you experience the entire wheel of emotions.” – Jacob Rundle, Author, Augur of Shadows

“I really enjoyed this book about an aging spy. Alec Foster is my kind of guy. Could he beat Jason Bourne in a fistfight? Hell no. Could he drink him under the table? More than likely!” Dean Tongue, Author, Machine Gun Jesus, Polly The Paedophile Slayer, V is for Violence

“A Young Man’s Game is a quick read, with fast-paced action, set in Berlin. Alec Foster is a spy with a mission to identify the traitor in M16. His story unfolds with page-turning suspense.” Lisa De Castro, Author, Margot

What readers are saying about Paul Blake

“A fantastic debut, and definitely an author to keep an eye on in the future.” – Sean McMahon, Author, Fir Lodge, The Dark Restarter

“Paul Blake writes in an engaging manner that draws the reader in from the opening lines onwards.” Craig Cavanagh, Goodreads Reviewer

Paul makes quite a splash with this, his first book. The detail he has put into the story is phenomenal. I felt as if I could go to Google maps and follow Alec’s adventure.

A number of seemingly random details knit together as the tale progresses and the action heats up.

I am eager to see Paul continue to home and perfect his craft. He’s off to a wonderful start. This beats James Bond any day.

This story illustrates brains over brawn, when a middle-aged MI6 agent, who has been behind the desk for too long, finds himself unexpectedly on the run for a crime he did not commit.

Alec Foster takes the reader on a detailed journey through the streets & subways of Berlin to prove he is not guilty and solve the case.

Not only must he battle Russian assassins he must also battle his own inner demons from past relationships.

This story would make a great movie.