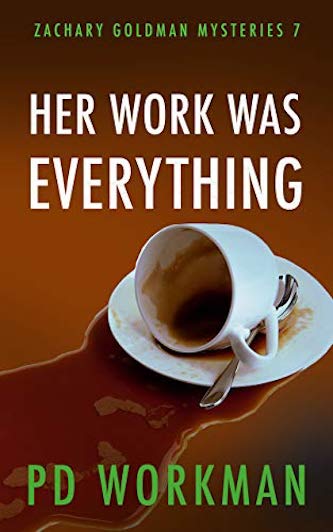 There’s something going on at Drake Chase Gould.

The death of intern Lauren Barclay is just the tip of the iceberg. When Lauren’s roommate hires Zachary to look into what was, on its surface, a tragic accidental death, Zachary gets more than he bargained for.

Not only is there definitely something up at “Chase Gold,” but he quickly realizes that one of the principals of the investment banking firm is Gordon Drake, Zachary’s ex-wife’s current husband.

And that is a recipe for disaster.

Zachary is running into roadblocks everywhere he turns, and if someone at Drake Chase Gould is responsible for Lauren’s untimely death, then he is putting himself right in the murderer’s crosshairs.

Zachary Gilman is a private investigator with many personal problems.

As you read each new book with him as the PI, you learn more and more until he is like an old friend. Yet, each new case is totally different from previous ones and you never can figure it out completely until P.D. Workman spells it out for you with Zachary looking at a case from his own way of thinking.

In this book, a woman asks him to look into her roommate’s death which she does not feel is accidental as the police do.

When he checks into her work situation, he finds many possible scenarios that could be reasons for a non-accidental determination.

I found myself reading faster and faster, following the exciting revelations of the case, until the final page.

Zachary Goldman is not your normal, every day PI. In fact, he’s not your normal everyday person. He has crippling anxiety, ADHA, flashbacks, physical scars, difficulty bonding or the inability to let go of a relationship. In other words, he is a hot mess.

As such he has become one of my favorite fictional PIs. Also, he sees things that others either miss or dismiss as unimportant and is very determined to get to the bottom on any case he takes on.

Her “bad guys” have a tendency to come out of left field and catch you by surprise when you find out who it is. Even though Ms. Workman’s stories aren’t necessarily “shoot ’em up” action-packed (Zachary doesn’t carry a gun) there is always plenty of action going on, plenty of suspense, and a lot of not your run of the mill mysteries to solve.

If you haven’t picked up one of Ms. Workman’s novels I recommend that you remedy that lack as soon as possible. You are missing out.

Even though Zachary is my favorite of her characters, they all are great and you can’t go wrong with any of them.

This is the seventh book in the Zachary Goldman series and I must say that while I like the character of Zachary immensely, I would not want to spend any time in his shoes.

Each thrilling installment of this series sheds a little more light on the unfortunate and heartbreaking background that forged such a damaged (albeit remarkable) individual and each story puts him firmly in the path of imminent peril. In this story, Zachary is tasked with investigating the “accidental” death of a young woman whose roommate is suspicious of the circumstances surrounding the fatal drowning.

As Zachary delves into the life of this young lady to see if he can uncover any reason someone might have wished her harm, he becomes fixated on the workplace in which the victim spent virtually every waking hour.

This company appears to be working its interns to the brink of death (or at least to the brink of total meltdown). As fate would have it, that workplace is none other than the firm run by his ex-wife’s new romantic partner. How’s that for an uncomfortable and awkward situation?

This book is an excellent choice for anyone who enjoys a suspenseful “whodunnit” mystery with a contemporary setting and plenty of suspects and colorful characters to grab your attention.

Allow me to warn you, however, if you harbor any Edward Snowden-style suspicions about computer security and spyware, this book may be a trigger for you. Despite that (or perhaps because of it), it is a completely captivating, thoroughly entertaining, and eerily plausible story that showcases Zachary’s investigative prowess.

His ability to stay on task and be such an effective investigator is all the more extraordinary in light of his ongoing personal struggles with mental health issues that would leave most people struggling to simply get out of bed in the morning.

I can’t wait to see what life (or the author) has in store for him next.

Please click HERE to find Her Work Was Everything on Amazon.