Daily Review: Whisker of a Doubt by Leighann Dobbs 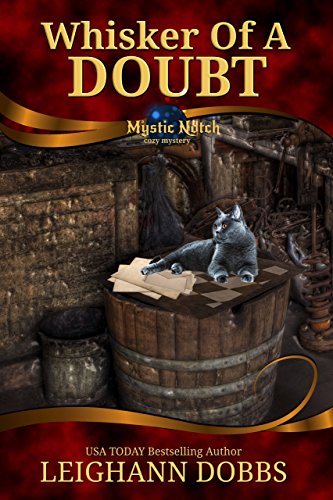 It’s up to Willa, Striker, Pandora and the other cats to solve Albert’s murder and save Mystic Notch.

When retired postmaster Albert Schumer is found dead on the steps of the post office, the whole town of Mystic Notch is disappointed he won’t be able to play in the annual checkers tournament.

But when his ghost informs middle-aged bookstore owner Willa Chance that he died trying to deliver an old letter, which has mysteriously gone missing, Willa realizes Albert didn’t just slip and fall. Someone killed him. Even worse, it turns out the letter contains a list of ingredients for a spell that could wreak havoc on Mystic Notch if it falls into the wrong hands.

The good news is that Pandora and the Mystic Notch cats are on the case. The bad news is that Pandora hasn’t made much progress in getting Willa to receive her subtle communications. She’s going to have to step up her game in that area because the cats are depending on her to secure the help of the humans if they want to stop the killer and protect the letter. Lucky thing Willa’s love interest, Eddie Striker, seems to be more receptive to Pandora’s attempt at communication.

Pandora might have a way to help the humans stop the person with the letter, earn the respect of the other cats, and help Willa and Striker realize they are made for each other. Will it work? Let’s hope so, because the fate of Mystic Notch depends on it.

t isn’t often that you find a series that each episode within leaves you wanting to read more. This series revolving around a bookseller, Willa Chance, with her bookstore cat, Pandora is just that, a series that I eagerly await the next tale.

Willa had been in a dreadful car accident that left her with a painful leg, and an ability to speak and see ghosts. Willa learned that her Grandmother left her home and business, the bookstore, along with Pandora to her, back in her hometown of Mystic Notch.

The name tells you a lot about this gentle paranormal murder series. Willa has an ability, also Pandora has one too. The story is told from both of their viewpoints.

While Willa searches for the killer of the retired postmaster, Pandora and friends also are seeking the murderer. There is more than just finding a murderer, there is also the future of the town at stake.

This series is very entertaining. If you are willing to believe in magic and sixth, seven senses, you will find a well-written mystery novel and series. I eagerly await volume seven.

I wanted to read something in between reading my books for review that didn’t have any angst, no love triangles, etc. Something that was on the lighthearted side, just fluff and entertainment. This latest installment in the Mystic Notch series fit the bill, with the bonus that the main cat in it has the same name as my furbaby, Pandora. What’s really funny is Pandora doesn’t get along with Otis (one of the Mystic Notch cats) and my daughter has a cat named Otis.

Whisker of a Doubt moves things along several lines. Willa finally starts to believe in magic again (she seemed to as a child), she and Striker are back on and find out they have more in common than just their mutual attraction, and Pandora makes a little headway getting Willa to communicate with her.

The case involves the death of a former postal worker, Albert Schumer, and a missing letter with a list of ingredients that have been hidden around Mystic Notch. Put together these ingredients can be used in a spell that can undo the pleasantry charm that was cast on the quiet town so long ago.

It’s up to Willa, Striker, Pandora and the other cats to solve Albert’s murder and save Mystic Notch. The murder is solved but something happens so all may not be well in Mystic Notch for long.

I like this mystical cozy mystery series by Leighann Dobbs because the books aren’t very long and they have great characters in them. It takes place in a very small town in New Hampshire so there’s a cast of eccentric characters they show up in each book. They’re clean reads with mild Biblical swears.

Please click HERE to find Whisker of a Doubt on Amazon.