Daily Review: The Weight of Shadows by Karl Holton 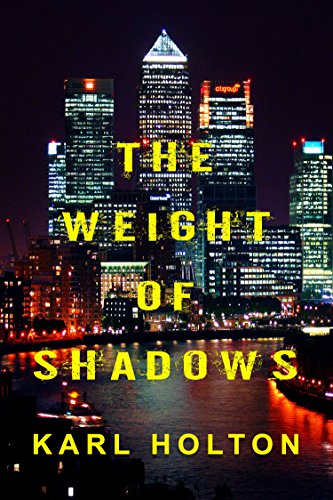 “The weight of shadows can be devastating. I’ve been collecting them since I was a young man….”

A gripping crime thriller mystery with twists from the beginning to end.

When you have spent your life in the shadows, what would you do at the dying of the light?

Three years ago the best murder detective in London is blamed for the death of his colleague and kicked out of the Met.

A man with secrets buried in the past and present returns to London, the city that started the mysterious career which made him a billionaire.

The two need each other.

But they have no idea how much.

A noirish, hard boiled exercise into the seedy underworld of London. Thoroughly enjoyed the depth of character and bleakness of their existences. The plot twists and multiple character storylines were deftly handled.

The author gives the characters arcs of growth as the novel progresses. Looking forward to the next book in the series as I understand one is currently being developed.

“The weight of shadows can be devastating. I’ve been collecting them since I was a young man….”

Three years ago Danny Benedict was the resident genius with homicide at the Met. In a chilling prologue, we learn why he carries physical and emotional scars from what turned out to be his last case. Now he’s an investigator with NCA Organized Crime Command, and the team has its hands full trying to track down mobsters with foreign ties.

DI Wallace is a whip-smart detective with the Flying Squad. Her team is sent to the scene of a major jewelry heist & it’s not long before she realizes things just don’t add up. But even she couldn’t have guessed where the investigation will lead.

Ray Hanson is a billionaire with a decidedly shady past. He left London years ago but personal reasons have brought him home. Besides, he has some scores to settle. First, he needs to assemble a team, and he has specific people in mind to execute his plans.

These are the 3 MC’s and initially we follow them in alternating chapters as their storylines take shape. By circumstance and design, they eventually cross paths in this fast-paced, intricate and intelligent thriller. They’re compelling but very different characters which make for entertaining interactions and great dialogue.

But it’s Benedict that really shines. He’s usually the quietest character in the scene but you get the feeling he was born with a few more grey cells than the rest of us. When he does speak, his lack of social skills frequently (if unintentionally) has darkly funny results. This is a man who can tick off an entire room with a single sentence, and I thought he was a hoot.

There is a large cast of peripheral characters including government agents, mobsters and cops. Of note are DCI Evans, an old nemesis of Benedict’s and pinhead of the highest order. And then there’s the Doctor, a man with all the charm of a Komodo dragon. Let’s not go there.

All these elements combine to produce an entertaining read that keeps you turning the pages. And that ending. I don’t know who’s more gobsmacked…Benedict or the reader. There’s a big question mark left hanging after it’s all done and dusted that guarantees I’ll be moving book Number 2 up on my reading list.

Please click HERE to find The Weight of Shadows on Amazon.