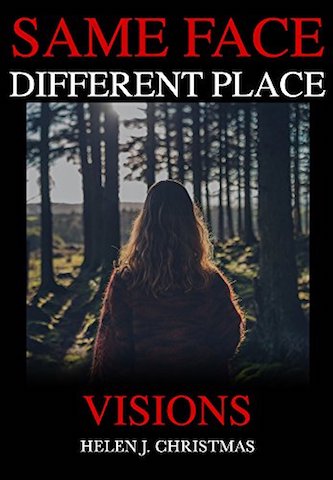 Christmas pours on the suspense from the first page and doesn’t let up until the very end in this classic good versus evil tale set outside of London.

Visions is a psychological thriller mystery set in rural England. The year is 1985. It’s been 12 years since Eleanor escaped London, discarding the fragments of her tragic past to discover a new life. She is hiding in a remote country village, a place where she truly believes she will be safe.

Her neighbour, James Barton-Wells is desperate to save his beautiful historic country house from ruin; but this has attracted the attention of a wealthy property developer from London whose seemingly altruistic offer to bankroll the restoration masks a sinister game plan. Jarred by suspicion, Eleanor consults her friend, Charles Bailey. Charlie has his own story – fearful that Perry Hampton is the man who undoubtedly ruined his future.

Against all odds, the characters are drawn together in a battle to save Westbourne House, oblivious to the menace that surrounds them. Yet it is not until Eleanor comes face to face with a deadly adversary, she finally understands the dangers that threaten those she loves.

Can Eleanor unravel the clues that conceal an evil crime from the 70s? This book will draw you into a world of suspense with shocking psychological twists you will never see coming…

Wow. Christmas pours on the suspense from the first page and doesn’t let up until the very end in this classic good versus evil tale set outside of London. This is the second book in a series, but it stands alone just fine as the author fills in enough backstory to carry this novel to its wonderful conclusion. Between beginning and end, we find a little romance, a lot of mystery, some humor, and community.

The story opens with our heroine, Eleanor, living in a caravan on a country estate. Her host is a gentle generous man. James is devoted to hospitality and his beautiful home. When that home is threatened, his generosity pays off when Eleanor recommends Charlie as a contractor to help him with his needed repairs.

Will the repairs be all he needs to save his home? What will happen to his family if they are forced to leave? Will the evil Hamptons get their greedy hands on the house? Does the house become haunted?

We finally learn most of the answers to our questions but evil is pervasive enough to fill a third volume in this series. I recommend this book to lovers of suspense.

This is a gripping tale of suspense. The dread sets in almost immediately and deepens as the complexities of the plot unfold. This is the second in a series of thrillers that revolve around the central figure of Eleanor.

A woman of firm resolve, faced with tragic loss and almost overwhelming challenges, she has made a life for herself and her son Eli. Her fortitude and courage stands in stark contrast to the self-centered malevolence of Perry Hampton and his family. Good and evil collide as the two families are brought together by the desperate circumstances of a third family trying to save their home. The Westbourne House, a lovely old mansion turned boutique hotel, on 2000 acres of unblemished countryside, is an apt setting for the battle that ensues.

The greedy developer, Perry Hampton, will stop at nothing to defeat the desperate Wells-Barton family hoping to preserve their ancestral estate as an essential part of their lives and the life of the local community. The author does a wonderful job of conveying the malicious motives and actions of the loathsome Perry Hampton and his disturbed son.

She is able to evoke a sense of outrage at the suspense and terror these two men are able to inflict on others. That Eleanor has something on him from an episode in their past, [a story told in Book 1 of this series] makes Perry Hampton all the more ruthless in his pursuit of his ambition to destroy the families that have joined forces against him.

How far will the Hamptons go to achieve their aims? Will they succeed in vanquishing Eleanor, the Well-Burton family and others who stand in their way? You’ll have to read this taut, well-written saga to find out. There’s a third book, too, that demands to be read once you’ve begun to pull for Eleanor, her son, and those at her side.