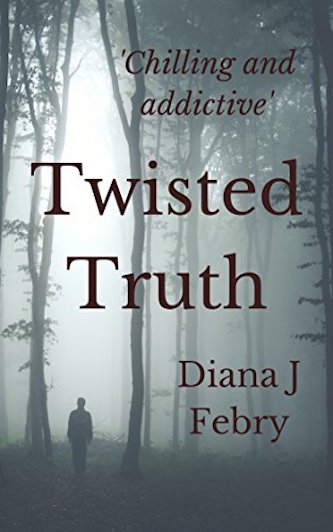 A tightly-written, well-crafted, detailed story rich in a main theme and subplots.

It’s hard to defend yourself when you have memory lapses, and everyone thinks you are crazy.
Journalist, Megan Roach, is given a story by an old man in a nursing home that could make her famous.

When her carefully constructed life starts to unravel, she is forced to confront her childhood demons and the possibility she could be a murderer.

DCI Peter Hatherall uncovers a conspiracy that confronts his own beliefs and goes far deeper than Megan Roach imagined. But can he believe anything she says?

If you love a good English mystery, you must read Diana Febry’s books! She’s my go-to author whenever I feel like diving into a brain-storming session and try to figure out “who done it.” Twisted Truth is the newest installment in her Peter Hatherall series, and just like the previous books in the series, it was impossible to put down.

A young journalist Megan Roach was dreaming of a good scoop that would propel her career to new heights. What she didn’t expect, however, was that the story which an elderly man handed her (together with a box containing supposed evidence) could not only cost Megan her career but endanger her life as well.

The plot was dark and haunting, and the use of an unreliable protagonist technique was wonderfully executed. I admit I was wondering a few times if Megan was indeed simply paranoid and certain events were a mere fruit of her imagination.

Twisted truth. What an apt title in our age of fake news and so much corruption, where truth is hard to come by or believe. Of course, that title captured my attention but I’m also a frequent reader of this author, having read the earlier in the Powell series. And speaking of fake news, no surprise that one of the main characters is a reporter, Megan Roach, who works with her photographer, Rob.

They are cast well; she with the frustration of working for a rag newspaper and wanting her chance at fame and accolades and he a great counter-part to her character, a gay man who is just embarking on a relationship with a man in the closet (an elementary school teacher). Then factor into the cast of great characters is Peter Hatherall, his side-kick DI Fiona Williams (who he has an unrequited attraction for), his wife Sally, and their children (featured in the backdrop).

Into the storyline comes David Prater a wealthy and influential businessman, his mother, Miranda, a deceased wife, Carolyn (the victim who we learn about in hindsight who has a lover on the side who was also murdered with her), and mention of the rich and well connected deceased politician father.

There are many other characters who enter for subplots that shine richness into the story: the newly married couple who ask Hatherall to check into another of their friends who have gone missing, a young runaway boy who stole a horse from a glue factory but this is no ordinary horse, and Lorna a friend who mysteriously pops up from Megan’s childhood (a childhood she doesn’t remember as she’s been adopted).

The story begins with Megan and Rob covering a story at a nursing home. There an elderly man on a wheelchair surreptitiously captures her attention. She mistakes him for a demented elderly, which couldn’t be further from the truth. He has a box he wants to give to a reporter. He can’t go to the police; it’s too dangerous—the police are in cahoots with the powerful involved.

Megan is doubtful about its contents until later when she opens it and see evidence that points to a murder; of David Prater’s wife and lover. As the story unfolds the reader comes to learn that Carolyn Prater knew her life was endangered. She wanted to leave her husband who she claims has secrets.

The storyline’s intensity increases when Megan asks a police officer friend of hers to send her the file on the auto accident that killed Carolyn and others. It’s missing. Been deleted or sideswiped and she is told to leave it alone. Into the story factors the earlier mentioned boy on the horse who Hatherall and Fiona are now looking for.

While on that case Hatherall catches wind that a reporter has asked about Prater’s wife’s missing file. When his interest is piqued, he enquires to some locals to discover that David and Carolyn had a discreetly open relationship. And another juicy tidbit is it’s questionable that their sons are his.

As the storyline comes together the reader goes beyond questioning if Carolyn and others in the car were murdered to who did it? No spoilers here. This is a tightly-written, well-crafted, detailed story rich in a main theme and subplots.

The relationship between Hatherall and Fiona is witty and well dialogued, which has always been a treat in reading this author. Febry knows how to weave a mysterious yarn that not only captures and holds attention but is highly entertaining.