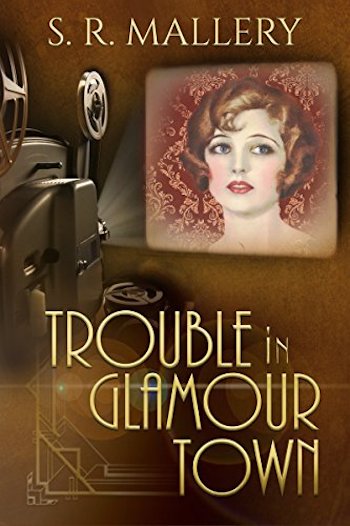 The historical facts that make the story come to life in your mind are enchanting.

As real celebrities of the time, such as Clara Bow, Lon Chaney, Gloria Swanson, and Rudolph Valentino float in and out, a chase to find the killer exposes the true underbelly of Los Angeles––with all its corruption.

I’ve been a fan of Sarah Mallery for a long time, and I couldn’t wait to get to this new story of hers. I know that her stories are always incredibly riveting and hard to put down, so naturally, my expectations were high for this new novel, and I must say, it was brilliant!

What I really enjoyed about Trouble in Glamour Town was how realistically life in old Hollywood was portrayed, and it wasn’t glamorous by any means. Mafia and bootleggers, corrupt policemen and money-hungry producers, stars who are as ugly on the inside as they’re beautiful on the outside, and unexpected revelations that one makes about themselves after seeing behind the scenes of the most coveted place for every young girl.

Historical accuracy and era portrayed in this novel were as always on point. I could vividly see the costumes, the restaurants, the villas in which prohibited alcohol flowed freely and morals were nonexistent, and just an atmosphere of old Hollywood that came alive in front of my eyes.

Another wonderful thing about this novel was that it was not only highly entertaining and enthralling, but also that it teaches an important lesson, such as to listen to one’s heart and not follow the path that someone has designated for you.

It was an absolutely wonderful read, and I already can’t wait for Ms. Mallery’s new story! Five huge stars!

Welcome to Los Angeles, California. The year is 1926, and the reader finds themselves smack dab in the midst of the Roaring Twenties. Prohibition is in full swing, and there is more booze sloshing around in the speakeasies than you can imagine. Are you there with me? Step back in time and be prepared to read what it was like back in the good ole’ days when Model T’s were king, and Flappers filled the streets.

On the set at Medford Studios, a cold-blooded murderer has just gunned down Mr. Harris, the “big-shot” Producer. Rosie Paige, an actress in the making and Eddie, her boyfriend, an assistant to Lon Chaney, are on the set when the murder occurs. Never in their wildest dreams did they think they would be involved in a real-life murder investigation. Besides, Rosie and Eddie have dreams they would like to fulfill if Beatrice, Rosie’s mother will let them.

The first officer to show up to the investigation is Detective Frank Lozano, who is fighting an alcohol-induced hangover from the night before. Lozano is a washed-up cop having lost his family to his drinking habit. Between the Mafia, bootleggers, and corrupt police officers, Lozano stands out as a decent guy who swears he will solve the murder. I liked his character. All of his faults made his journey all the more worthwhile.

Like many of the silent movies from the period, Trouble in Glamour Town leads the reader into the dazzling world of movies and movie stars, where behind the scenes, everything is not as lovely as it appears. Hollywood, where money-hungry producers are seducing young female wanna-be actresses for sexual favors, where dirty cops are on the take, and drunken parties hide the dreams and desires of many a young woman. Intertwined with this murder mystery is a novel rich with the lessons of the past that still scream to us from our current headlines today.

As with all of S. R. Mallery’s novels, the details and the historical facts that make the story come to life in your mind are enchanting. I heard the sound of the Model-T and experienced Clara Bow’s wild party first hand. As the mystery unravels, the murderer pops from the pages, a total surprise at the end.

This book was a fun read that I read in a couple of nights. If you love murder, mystery, and mayhem dive into pages of Trouble in Glamour Town. At $.99 this book is a steal!