Daily Review: A Treasure to Die For by Terry Ambrose 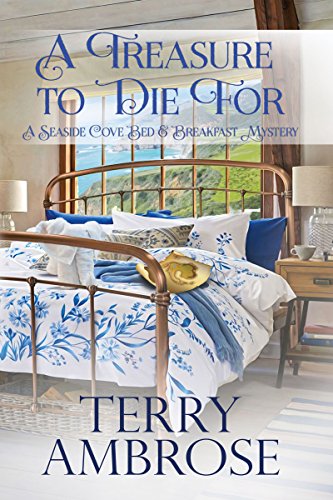 There is suspense, mystery, secrets, intrigue, humor, spying, family issues and a hint of a budding romance.

Bandit gold and sunken pirate ships. What could be better for the reputation of a quaint coastal California town like Seaside Cove?

Local eyebrows go up when eight friends come searching for a 16th Century Spanish galleon. After all, everybody knows there’s no such thing as Spanish gold off this part of the California coast.

The group’s visit turns ugly when a killer strikes and leaves Seaside Cove Bed & Breakfast owner Rick Atwood with a trunkful of questions.

Who murdered one of his guests?

Will his precocious ten-year-old daughter stop interfering in his investigation?

And can he squelch the latest town gossip? Which is, of course, can Rick and his daughter do what the cops can’t and solve the crime?

Let us go on a treasure hunt!!! We are going to Seaside Cove. This is a quaint town on the California coast. This is where Rick Atwood is the owner of the Seaside Cove Bed & Breakfast. He lives there with his ten-year-old daughter.

The B&B is full with a peculiar group looking for lost treasure. None of the group seems to get along with each other. They each received an invitation with a piece of a treasure map.

Now they are focused on finding a sunken 16th Century Spanish galleon which in all probability was never near this part of the California coast.

Then one of the group is found dead on the edge of the cliff!!!!!

Which one of the guests is the murderer or is there an unknown killer loose on the Cove?
Rick is determined to help find the culprit. The characters along with the small town of Seaside Cove are very well described, realistic and artfully created. The town has a quirkiness that draws you right into the setting. You will enjoy meeting the town folks.

The story is narrated from several different views.

There is suspense, mystery, secrets, intrigue, humor, spying, family issues and a hint of a budding romance. There is overall good development throughout the story with smooth, fluent writing sharing plenty of little details to keep the reader’s attention.

This is the first book in a new cozy series. Looking forward to the next one. A highly recommended read!!!

I have to start by commenting on that cover! So beautiful. I would love to escape to that room and place immediately and I may never come back.

Rick Atwood has inherited a Bed & Breakfast in Seaside Cove from his grandfather, Captain Jack. He and his 10-year-old daughter Alex have moved in. They also seem to inherit Marquetta, a young attractive chef, who knows everything about running the B&B. The place is at full capacity as a group of treasure seekers has come to town to search a vessel that is said to have sunk just off the coast.

Unfortunately, one of the group is found dead – murdered and now Rick has a house full of suspects and his daughter wants to help solve the case.

This is a unique cozy mystery. Alex is not your typical 10-year-old. That girl is inquisitive and takes nosy to a whole new level. Her father does his best to reel her in and keep her safe but she really knows no bounds. Rick a former investigative reporter steps in to help the young officer in charge of the investigation.

He has never had to handle a murder before and the mayor has tied his hands as far as asking for support for another department. He usually spends his time checking water meters and keep the tourists out of trouble. He really needs Rick’s help to find the killer.

The author has taken a unique approach. Marquetta had given a journal to Alex as soon as she arrived. The chapters go back and forth from Rick’s and Alex’s points of view. Alex’s pages usually start with or are just a journal entry. I loved her perspective of what was going on around her. Some of her ideas are pure fantasy and some are right on the nose. Rick has and is going to have his hands full with his daughter now and for many years to come.

The mystery itself had a lot of moving parts, it was fun to follow along with Alex and Rick to get a bird’s eye view of their investigation. It was also interesting to learn the history of these sunken treasures found under the sea and the business thinking behind the groups of treasure hunters.

I was very taken with the characters Mr. Ambrose had introduced. They were believable and so real they jumped right off the pages. The pint-size Nancy Drew, Alex, absolutely stole my heart.

I loved this story! I am excited about this series! A perfect escape, summer read or virtual vacation!

Please click HERE to find A Treasure to Die For on Amazon.