Daily Review: The Tempting Taste of Danger by CeeCee James 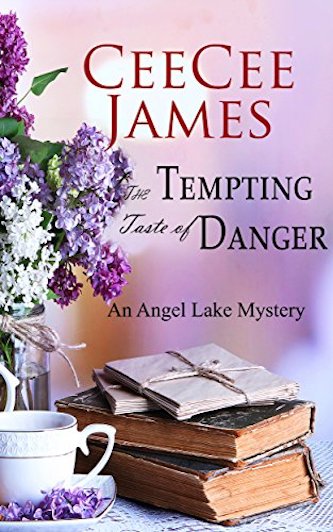 This time, Elise is both the suspect and target of a “mad hatter.” It’s more like Alice in Weirdland.

Elise Pepper has landed her dream job at the Capture The Magic bookstore. Peace and quiet and thousands of books to herself – including a $2m first edition of Alice in Wonderland. What more could she ask for?

It can’t last of course. Her blissful solitude is rudely interrupted when someone turns the second floor of the building into a Down the Rabbit Hole-themed escape room.

But the noise is the least of her worries – what’s worse is the dead bank executive upstairs and the missing first edition. Now Elise is suspected of both theft and murder, even as the killer taunts her with Alice in Wonderland clues.

Can she find out who did it before she takes the fall for the crime?

The story opens with Elise interviewing for a job at a bookstore. On display, is an original copy of the book of Alice in Wonderland, and it’s worth a lot of money.

Then Dave rents out the upstairs to a couple of guys and things begin to get crazy. Oh so crazy, and scary. Then a murder, then a kidnapping of a sort and a few laughs.

It’s a good read and enjoyable as all the earlier Angel Lake Mysteries.

The Tempting Taste of Danger is the most action-packed, gripping and suspenseful of the Angel Lake Mysteries. This last volume in the Angel Lake Mysteries seems to have a heavier focus on the mystery which includes death threats, a stolen first edition book, multiple love interests for Elise, intense new neighbors, and a kidnapping.

The romance portion although smaller in word count is at times poignant and heartwarming resulting in a happy ending for Elise and Brad but a potential change for Lucy.

I was enthralled from the very first page to the last. However, there are still unfinished storylines which lead to the question of sequels.

Great series. This mystery was definitely for Alice in Wonderland fans. After reading these books you feel as if Elise Pepper, Brad, and Lavina are your friends.

Elise starts a dream job (any avid reader would agree) working in a local bookstore. The owner is a HUGE Alice in Wonderland fan and has a first edition, signed by Lewis Carol himself. This time, Elise is both the suspect and target of a “mad hatter.”

The book was full of CeeCee’s usual twists and turns that you are stumped as to who the is the murderer. The killer definitely was a surprise, never saw it coming.

The ending was the best. I highly recommend this series.

Please click HERE to find The Tempting Taste of Danger on Amazon.