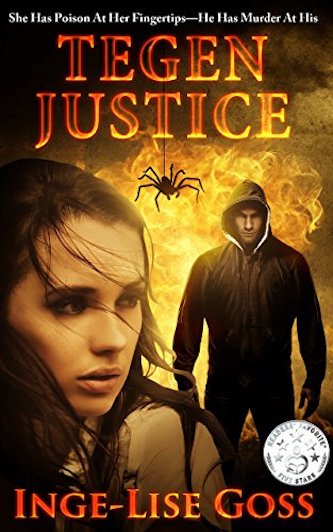 Layers of excitement and suspense continually grip the reader throughout this novel.

After embracing her new Tegen existence, Sara Jones is determined to destroy her ex-lover’s organized crime empire, one link at a time.

Along with her newly acquired skills of spider-climbing agility, self-healing powers, and the ability to eject poisonous needles came the haunting need to consume blood and flesh tainted by Tegen deadly spiders.

Armed with her skills and using the alias Sally Jablon, Sara has tracked some nefarious associates of her ex-lover to Baton Rouge.

But before she can fully execute her plan to wipe out that criminal element, she is faced with her former lover, an out of control Tegen, and the repercussions of disobeying Tegen rules. Death and mayhem ensue as Sara tries to outrun and outsmart an enemy she knows all too well.

For fans of The Hunger Games and Divergent comes a story that will have you turning pages long past your bedtime. You have found your new obsession.

As a person who often experiences arachnophobia to a greater degree than most people, I still found myself drawn into this fascinating and suspenseful novel.

It contains many ingredients that all good novels of this type should contain: an intriguing plot that moves at a steady, inexorable pace, and even some quirky segments, especially those involving the unique sort of life that the heroine is forced to lead, being human but simultaneously possessing “spidery” characteristics.

The fact that she’s courageous in dealing with her own pursuits as well as trying to keep her associate Wendy under control — and at the same time her need to battle her ever-increasing feelings of affection for Conner while maintaining a certain aloofness whenever she is in her company — all adds to the layers of excitement and suspense that continually grip the reader throughout this novel.

Certainly a unique journey into a strangely fascinating world of intrigue!

By Autumn Fallen Over Book Reviews

If you haven’t read book one then I would highly suggest you do, that way you will understand the powers the character has, why she has to have a black ring, along with why her spiders have to be with her, why she is investigating a certain family and why she has feelings for Connor.

It all comes together perfectly.

The book is pretty much fast-paced from the get-go. Sara is undercover trying to figure out a way to destroy her ex-boyfriend’s family and his crime organization. The only thing is she does not want her ex-boyfriend to figure out she is alive as she is supposed to be dead. Sara pretty much has gone with the name Sally Jablon, but will Connor know exactly who she is by the end of the story?

While Sally or Sara whatever you want to call her is busy investigating she is also trying to help Wendy who knows she is not supposed to use her Tegen power for revenge. It seems that Sally/Sara has her work cut out for her. While balancing the act of undercover and babysitting a Tegan who might be breaking the rules.

There is plenty of action; the plotline goes at a steady pace which is awesome. We also learn of Tegan enforcers which I think are pretty cool in this world of people having spider-like powers.

I do hope there is a book three as I want to know what exactly will happen to Sara/Sally when she returns home.