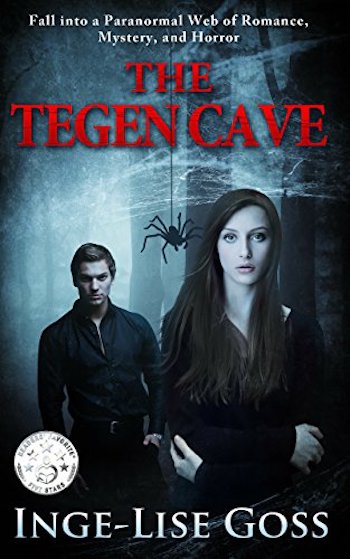 Is the crime family killing people with spiders?

Have you ever made a mistake that keeps coming back to haunt you?

On the run from her ex-boyfriend’s powerful criminal family, Sara Jones hides in Billings, Montana. But when people around her start dying from poisonous spider bites after she receives a mysterious package containing a hidden spider, she worries that the family has found her. Can she escape?

From its gut-grabbing prologue to its explosive conclusion, Goss’s debut story gives new meaning to the phrase “a blood-curdling adventure.”

Life takes an even more bizarre turn when Sara seems to be not only immune to the spider venom, but also surrounded by a sinister group of people using spiders to incapacitate their prey. Even her new boyfriend starts acting suspiciously. Just whom can she trust?Then to make matters worse Sara’s twenty-fifth birthday approaches, and her dark heritage begins to emerge. She is forced to make a life-or-death decision. And somehow, she must find a way to deal with the crime family.

An imaginative fantasy-thriller that will stimulate your senses.

Some things, like spiders trained to kill, may seem far-fetched, and cult members eating the flesh of cadavers may seem abhorrent, but Dracula set that table long ago. Besides, given Goss’s endowment of the cult with an air of historical respectability, the story is more imaginatively acceptable for anyone predisposed to the fantasy genre.

The story opens with a murder. Not some boring gunshot or knife slash … but a murder via spider bite. Now that the author has your attention, she executes an adrenaline filled escape. Sara Jones, an independent twenty-something, escapes from a crime family involved in child trafficking, drugs, all nasty stuff Sara just doesn’t want to be part of her life.

With no particular destination in mind, and on the advice of seemingly innocuous fellow bus passengers met along her journey, Sara settles in Montana, hoping to leave the horrid world behind. Shortly, while ensconced in a hotel and getting ready to apartment hunt, Sara is befriended by a handsome, nice guy.

At this point, the reader, and Sara, are forced into suspecting everybody. Who can Sara trust? Who is out to get her? Is the crime family killing people with spiders? Is the crime family the good guys and Sara is being sucked into a `spider cult’? Why is she immune to the spider bite that will paralyze and kill someone else? Why is she having a different physical reaction?

As the pages are quickly turned in this story, you’ll be artfully swayed, completely convinced you know where Goss is headed, then boom … wrong turn. What fun!!

This book places the reader right into the story from practically the first page, and I found myself reading half of it in one sitting because the characters, the storyline, and the mystery had such a great pull on me I just had to find out what happens next.

The story is told from the point of view of an independent and strong female protagonist Sara Jones who is desperately trying to make sense of her life in light of all the unexpected things happening to her lately.

Sara comes alive on the page and the author did a great job of getting inside her head and showing her emotions and innermost thoughts, so the reader is right there with her as her story unfolds. I don’t like to give spoilers in my reviews, but I will say that this is one of the most unique paranormal romances I have read in quite a while.

The world this takes place in is meticulously constructed, and the language flows so well I had no trouble picturing the scenes in my head as they unfolded. It is also fast paced and packed with action and twists, which keep you guessing right until the end.

Highly recommended for all fans of paranormal romance and urban fantasy!

Please click HERE to purchase The Tegen Cave on Amazon.